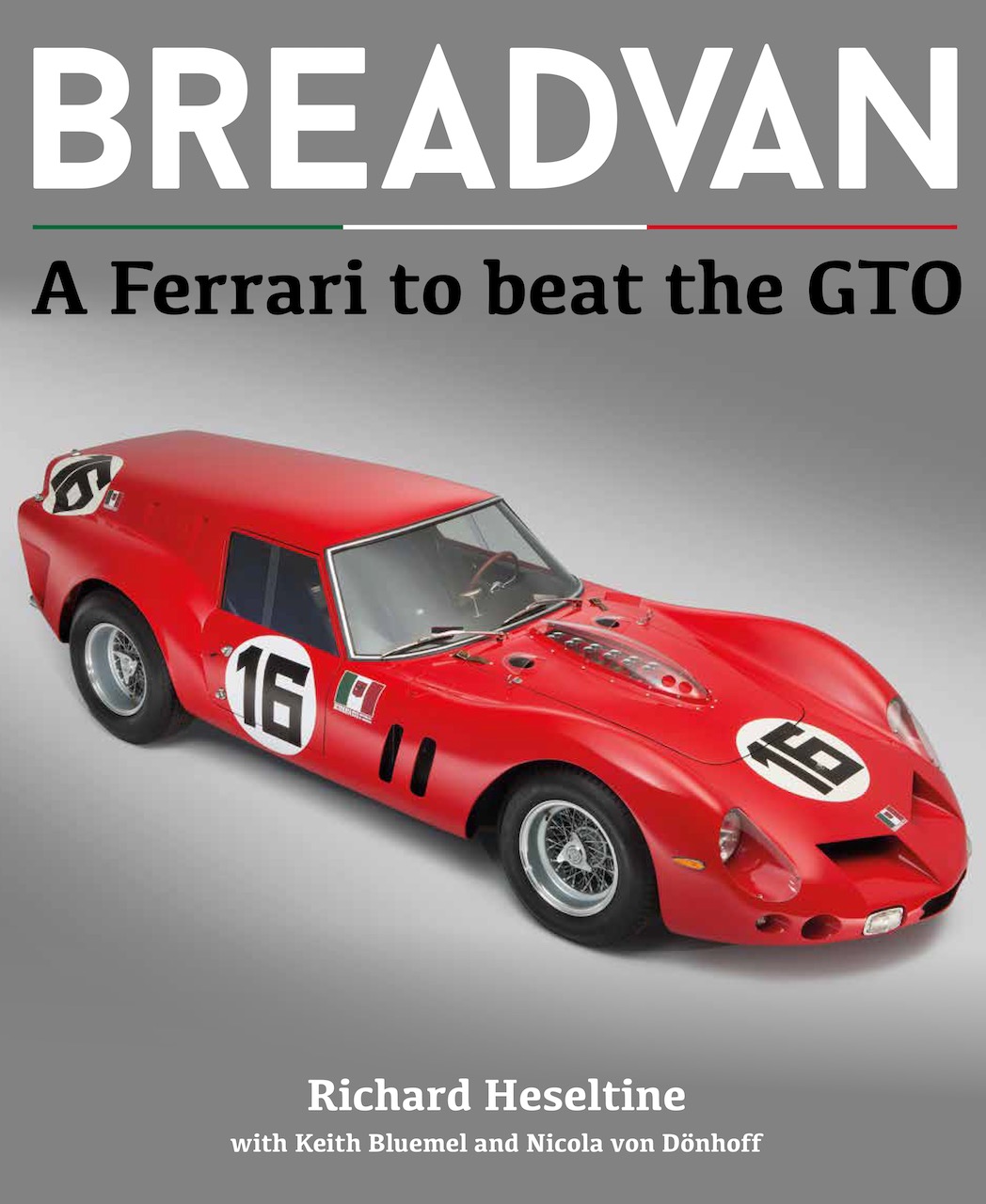 The Ferrari Breadvan, chassis number 2819 GT, is probably one of the most famous Ferrari’s in the world. Born from the fallout of the infamous “Palace Coup” at Maranello, it came to signify one mans challenge to Enzo Ferrari. In his new book “Breadvan – A Ferrari To Beat The GTO”, journalist and author Richard Heseltine charts the colourful story that lead to the birth of the famous and controversial racing Ferrari.

While the Breadvan may look like a Ferrari 250 GTO, what many don’t realise is that it began its life as a Ferrari 250 GT Short Wheelbase Competizione. Finished in silver, it was delivered new in 1961 to Belgian sports car ace Olivier Gendebien who raced it in the gruelling Tour de France under the Ecurie Francorchamps banner. It was then acquired by charismatic Italian aristocrat Count Giovanni Volpi di Misurata for his Scuderia Serenissima team. Under his ownership that it would be transformed into one of the most distinctive racing Ferrari’s ever created.

In the 1960s Count Volpi was one of Ferrari’s most important customers. Born into one of Italy’s wealthiest families, his status and connection to the marque was a key part of Ferrari’s marketing strategy. Volpi himself was interested in racing and used his wealth to establish his own racing team Scuderia Serenissima and through his relationship with “il Commendatore” lead him to order numerous Ferrari’s. Once such order was for a brace of new 250 GTO’s which were to be delivered in 1962.

However little did Volpi realise at the time that his but his investment in the upstart ATS team, which was established in the wake of the notorious ‘Palace Coup’, would lead to him being black listed by “il Commendatore” who labelled a traitor. Volpi’s order was cancelled and both men would not speak for over twenty years.

Unsurprisingly Volpi was stung by the rebuttle and hos treatment at the hands of Ferrari and as a result, charted a course of revenge that would see him using some of the Palace Coup exiles to create a Ferrari that could beat the new GTO’s.

Volpi’s team was lead by Giotto Bizzarrini who developed an aerodynamically advanced body that employed a dramatic Kamm tail at the rear. Prior to leaving Ferrari under a cloud, Bizzarrini had been working secretly on the new 250 GTO project and he basically carried over his ideas from that project and transferred them to 2819 GT.

By using of a dry sump, Bizzarrini was able to mount the engine further back in the chassis and combined with the lower body profile, it’s development was promising and suggested it could easily take on the new 250 GTO’s. The ultimate aim was to gain revenge against Ferrari and the best place to do this was at Le Mans.

It made its race debut in the 1962 Le Mans 24 Hours and arrived at the circuit in what was described as “rough” condition. Such was the rush to complete the project that the team had little time to properly finish the car, which lead to the track marshal’s demanding they repaint the car and add a rear wiper. It was during its Le Mans debut that it would earn the “Breadvan” nickname. During the race the Breadvan performed well despite its cobbled together appearance and an upset looked to be on the cards when driveshaft failure brought its race to a premature end.

After its racing career Volpi used the Ferrari on the road and shared it with glamourous friends such as Gunter Sachs and Gianni Agnelli also used it as a sensational road car. Both high profile friends would add some additional colour to the Breadvans story, in more ways than one!

Heseltine’s book is a thoroughly enjoyable read of the history of the car and the circumstances that lead to Count Volpi falling out with Enzo Ferrari. Bound within the weighty hardback tome are 221 pages of facts, facts from Ferrari historian Keith Bluemel, stories from Nicola von Dönhoff and over 220 fascinating archive photos that chart 2819 GTs incredible journey.

The additional history of this great car that Heseltine has uncovered is fascinating, as is the story of what happened to the car when it was exported to the US in the 1960s and its arrival in the UK in the 1970s. It has been on quite the journey! Now a regular on the historic racing scene that has seen it compete at Silverstone, Tour Auto and the Goodwood Revival, the Breadvan is a series competitor once again and has become the race car that Count Volpi dreamed. And Heseltine has brought saga together into a wonderfully packaged, must own book. It is a fitting celebration of the unique Ferrari that continues to be a fan favourite around the world.

“Breadvan – A Ferrari To Beat The GTO” is highly recommended for fans of historic racing Ferrari’s and especially for those who love a car who’s story is packed full of controversy, intrigue and plenty of what if moments. It retails for £45 and copies can be ordered from the Porter Press website.