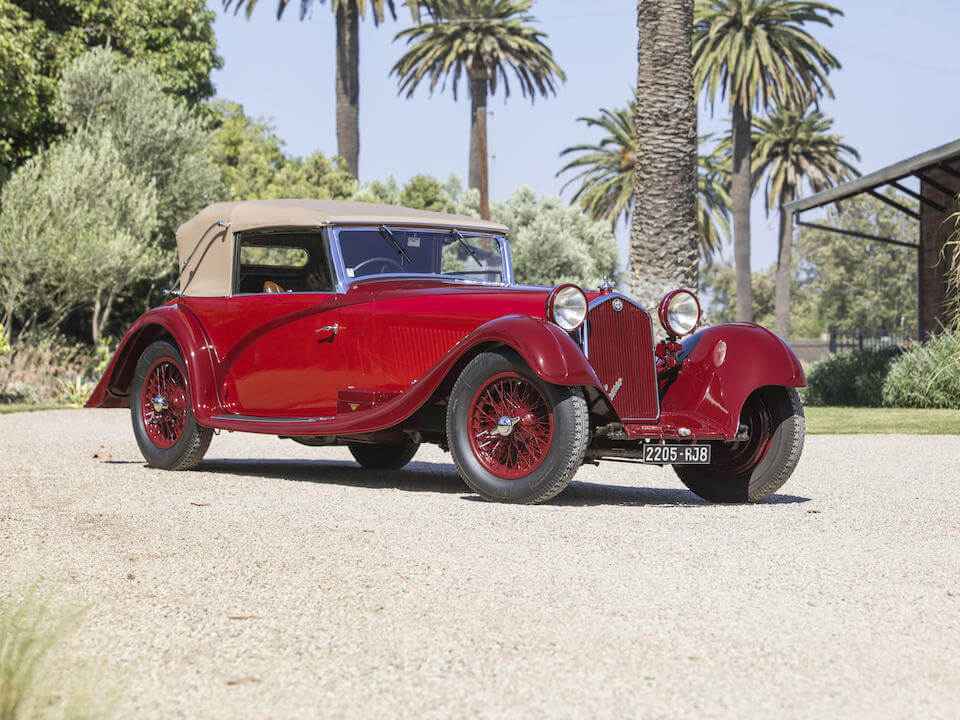 Bonhams is offering a stunning 1934 Alfa Romeo 8C 2300 Cabriolet as part of its Quail Motorcar Auction on 14th August 2020. Described as being a highly original example of the legendary 8C Alfa Romeo, it retains its original Figoni Cabriolet coachwork and its Alfa matching numbers engine and gearbox.

The iconic Alfa Romeo 8C was first introduced in 1931 and was a successor the successful 6C. Designed by the great Vittorio Jano, the new 8C played a very important role in establishing the Italian marque on the international motoring racing scene. The high performance 8C was powered by a supercharged, straight-eight, twin-overhead-camshaft engine.

It produced around 140BHP and the cars sophisticated design lead the 8C to victory at the 24 Hours of Le Mans no less than four times. It was this success on the competition circuit that played such an influential role in Alfa Romeo’s designs, right through to the 1960s. It was the significance and heritage of the 8C that saw Alfa bring the name back in 2007 with the launch of the 8C Competizione supercar.

The 1934 Alfa Romeo 8C 2300 Cabriolet being offered by Bonhams is one of five 8C cabriolets created by noted French coachbuilder Figoni. It was ordered by Raoul Calvayrac who lived outside Paris and the bill for the coachwork cost a massive 21,750 French Francs, a vast sum in 1930s France. At some point in its life the car ended up in New York, where it was sold to a Jim Ibold of Cincinnati.

It then passed to Italian car collector Patrick Ottis, who became the cars 4th owner in eighty years. It was displayed in unrestored condition at the Pebble Beach Concours d’Elegance in 2005 by Ottis, who later elected to have the car sympathetically restored. Emphasis was made on maintaining the cars originality and such wonderful details as the Alfa trademark crackle finish dash were left untouched.

Other details like the gauges are stated as being original and the 8Cs chassis and engine plates are intact and have never been moved. The quality of the restoration and its originality no doubt played a huge part in the 8C 2300 Cabriolet winning Best in Class at the 2018 Amelia Island Concours d’Elegance.

Finished in red with a slightly darker red flash creating a lovely two tone effect with the elegant sweeping wings, the 8C convertible features a contrasting cream roof and a tan leather interior. The whole car presents itself as a genuine survivor that hasn’t been over restored, retaining that all important character, which is often lost in the strive for concours level restorations.

Now offered for sale once again, this fabulous 1934 Alfa Romeo 8C 2300 Cabriolet which its exquisite Figoni coachwork would be the jewel of any collection. The marriage of Italian performance with French style is a rare combination and Figoni succeeded in creating an elegant and tasteful design that enhances the very best that Alfa Romeo had to offer in the 1930s. It exudes class and has the performance to match, thanks to the wonderful twin cam engine created by Vittorio Jano.

This 1934 Alfa Romeo 8C 2300 Cabriolet is one of the most important pre-war cars to come to market in recent years and its originality and matching numbers status are reflected in the estimate. Presented with a researched and documented history file, Bonhams have valued this wonderful Alfa Romeo at between £ 4,900,000 – 5,700,000.

More details on this car and the Quail Motorcar Auction can be found on the Bonhams website. A detailed video preview video of the 8C can also be viewed here.