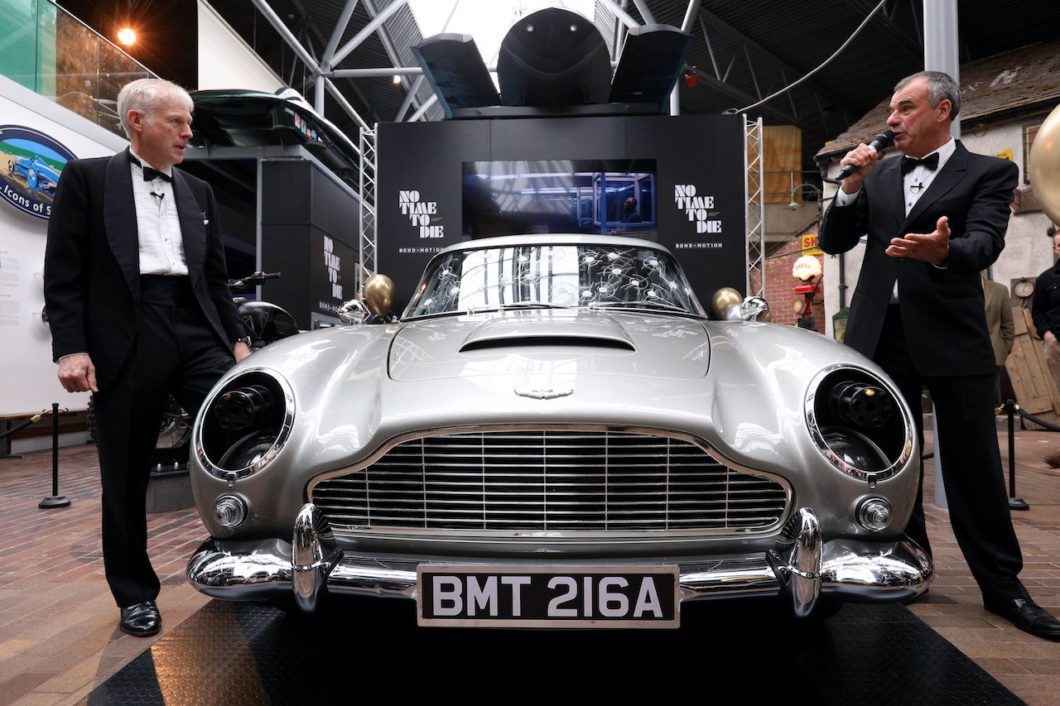 The new Bond in Motion – No Time To Die exhibition has officially opened at the National Motor Museum at Beaulieu. The launch took place on Friday October 15th and was opened in style with Lord Montagu driving into the Museum in an Aston Martin DB5.

Dressed in a black tie and dinner suit, Lord Montagu unveiled the display of the iconic cars, gadgets and costumes from No Time To Die with the film’s Special Effects Supervisor, Oscar-winning Chris Corbould.

Tim Browning also stood with fellow guests beneath the submersible glider he designed for the movie. The glider, named ‘Stealthy Bird’ by Q, now perches in its new home overlooking the exhibition.

Lord Montagu said: “Exhibiting Bond cars in the National Motor Museum is a great way of combining our subject – the history of motoring right up to the present day – with one of the best known themes from the world of entertainment. I am delighted that Eon have given us the opportunity to stage this exhibition as I feel sure it will be very popular with our visitors.”

Chris Corbould said: “The Bond in Motion – No Time To Die exhibition sums up everything we did in the film. The original vehicles are all there in one place to see – from the classics to up-to-date and even state-of-the-art cars. It’s a wonderful collection.’’

Bond in Motion – No Time To Die follows in the footsteps of Beaulieu’s popular Bond In Motion exhibition, which opened ten years ago showing 50 original vehicles from 50 years of Bond.

The new exhibition will offer the first opportunity for the public to see many of the original vehicles, gadgets and costumes from No Time To Die, against the backdrop of large screens showing action shots from the recently released film.

Four-wheel drive enthusiasts will enjoy Bond’s Land Rover Series III and the Land Rover Defender 110. A Triumph Scrambler motorcycle and Royal Alloy Scooter will be crowd-pleasers for fans of two-wheelers.

Visitors can see the Aston Martin DBS Superleggera, driven in the film by new agent Nomi, the No Time To Die Aston Martin V8 – which was last seen in The Living Daylights (1987) – and the Chevy Bel Air.

Costumes and accessories for Bond and Primo will stand as sentinels keeping watch from display cases inside the exhibition’s stainless steel cage. Visitors can swipe electronic tablets to read captions for all of the exhibits from the 25thBond film.

The exhibition at the National Motor Museum will be open until November 2022. More details can be found on the Beaulieu website.