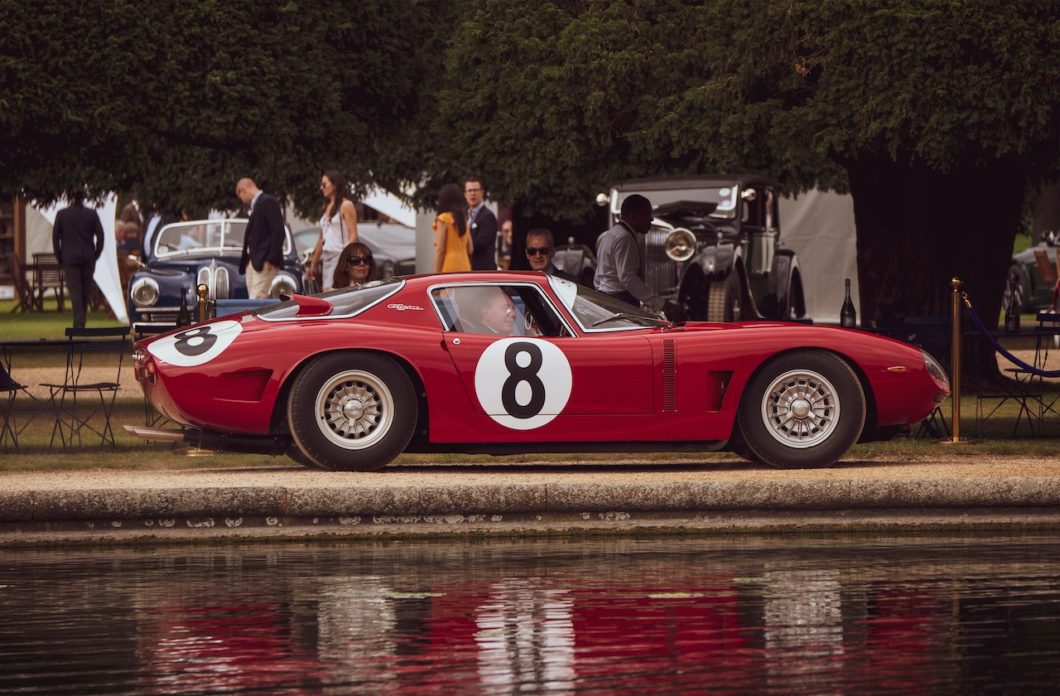 Bizzarrini continued with its exciting revival with a superb display of historic race cars and transport vehicles at the Hampton Court Concours d’Elegance, which took place over the weekend. This was the second concours event for the reborn Bizzarrini after its first public appearance at the London Concours in June.

Showcasing the original Bizzarrini 5300 GT Strada, the P538 V12 and the P578 V8 from the company’s collection, together with its Fiat 684 racing transporter and Fiat 238 ‘Scuderia Bizzarrini’ van made for a very special display. Hampton Court saw this trio of historic racing cars presented alongside their peers for the first time in many years.

Work continues apace on the prototype model of the Bizzarrini 5300 GT Revival Corsa 24/65. Currently being built at the dedicated Bizzarrini facility in the UK, the 5300 GT Revival blends traditional techniques and construction with highly contemporary processes and materials, using a combination of original archival engineering drawings and 3D scanning processes.

One of Giotto Bizzarrini’s most valuable skills was his ability to work at the limits of contemporary engineering. The original 5300 GT made extensive use of the strongest lightweight material of its day, glass fibre. The 5300 GT Revival Corsa will be built to FIA Appendix K spec for Historic racing and includes a one-piece fibreglass body. “Had it been available, we believe Giotto Bizzarrini would almost certainly have deployed carbon fibre in his racing cars,” said Christopher Sheppard, CEO of Bizzarrini, “As a result, the 5300 GT Revival Corsa will also be offered with a full carbon fibre bodyshell for those customers who do not need to conform to Historic Racing regulations.”

Although the spirit of originality is evident in every design and mechanical detail, some key modifications have been made with modern safety regulations in mind. For example, the original car’s fuel tanks were located deep in the sills, as well as behind the driver. This layout has been altered to accommodate a contemporary fuel tank system behind the driver. The overall fuel capacity is only marginally reduced, keeping the range within the requirements of a multiple round race series.

Rezam Al-Roumi, Bizzarrini’s owner, said, “We are extremely excited to bring the Bizzarrini marque back to life, and the 5300 GT Revival Series is a fitting initial entry to showcase our plans for a series of cars over the coming years – reflecting both the heritage and modernity of Bizzarrini.”

The 5300 GT Revival Corsa will be the first model to bear the Bizzarrini name since the GT Strada 4.1 concept of 2005. After the completion of the development prototype, a total of 24 customer cars will be built, each offered as an authentic contemporary interpretation of the 1965 class-winner at Le Mans. Designed to be driven, each Bizzarrini 5300 GT Revival Corsa can be modified to match its customer’s exact specifications.

“The car will of course be engineered for Appendix K FIA regulations,” said Sheppard, “but we will also be able to satisfy the desire of any customer who wishes to drive this spectacular car on the road.”

Following the 5300 GT Revival Corsa will be a new Bizzarrini model. “Our new supercar has been penned by the world-renowned automotive designer Giorgetto Giugiaro, who authored the original 5300 GT while he was at Bertone. He started to set out his vision for a contemporary Bizzarrini in front of us, which was a sight to behold. We are all hugely excited about this next chapter of the Bizzarrini story.”

The first customer deliveries of the 5300 GT Revival Corsa are already scheduled for handover to global clients in February 2022.