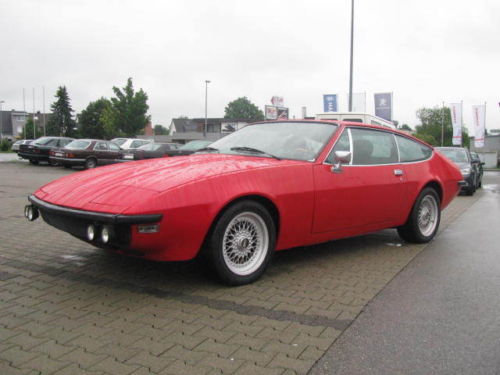 Back in April we featured an extremely rare Bitter SC which was for sale on the Isle of Man. It was an interesting design that got us looking into the history of Bitter GMBH. Bitter only built two production models during its troubled history, making them very rare cars indeed. Especially the Bitter CD. As a result they don’t come up for sale very often. The Bitter SC originally began as a design project as far back as 1969 when a concept was shown by Opel at the Frankfurt Motor Show. The concept was well received which encouraged Opel to approach Frua to build two road going prototypes.

In 1971 Opel’s design boss David Holls approached racing driver Erich Bitter, suggesting he should build the car. Bitter’s dream of building cars became a reality in 1973 with the launch of the striking Bitter CD Diplomat. Based on a shortened Opel Diplomat floorpan and mechanicals, the Bitter CD was fitted with a Chevrolet 327 V8 5354cc engine which was mated to a three speed automatic.

The sweeping body, which was hand built by Baur, bore a resemblance to the Ferrari Daytona and Maserati Ghibli. The new sports coupe was well received but, like many car manufacturers of the time, was unlucky to have debuted with a large and thirsty engine. The global oil crisis struck in October 1973 leading to the cancelation of most of Bitters orders. Production did continue however and lasted until 1979 when the Bitter CD made way for the new Bitter SC. A total a 395 Bitter CDs were built, well below the planned 200 per year target.

Offered for sale is a 1973 Bitter CD Diplomat. Very little information is provided other than to state that it is in good condition, has no rust and is said to run perfect. The listing description notes it has covered 50,000 miles and is car no 308 of 395. It is located near Munich in Germany.

We are normally pretty cautious when we spot listings on eBay for a car located in another country, especially one with minimal information. However the fact it is a Bitter CD Diplomat has really caught our attention. We’ve always been fascinated by the CD. It was a brilliant concept for its time, taking the tried and trusted mechanics of the Opel Diplomat and installing a small block V8 into a 2+2 coupe. It made for a great long distance tourer, an excellent GT car with a V8 soundtrack. All in a body that looks superb. It is such a shame the Oil Crisis ruined Bitters chance of success with the car.

The photos supplied in the listing show that the car looks to be in good condition. The photo sizes are small however so a detailed examination is not possible. We have to say that red is a very good looking colour on the CD. You could easily park it between a Ferrari Daytona and a Maserati Ghibli and it would feel right at home. The interior presents well though we suspect the front seats are not original, judging by the fabric pattern. Customers had a choice of leather of velour fabric seats when ordering their hand built CD and judging by the back seat fabric, we expect its original.

The original steering wheel is in place and the wood and leather dashboard appears to be in good order. The original radio has been replaced by the rather obvious modern unit which is protruding from the transmission tunnel cover. That may explain the cable running back towards the rear armrest, which we suspect is hiding a CD multi-changer. Unfortunately no photos are supplied of the engine so we can’t comment on its condition. The Chevrolet 327 V8 is a tried and trusted design so parts availability, should anything go wrong, shouldn’t be an issue. It also presents the prospective owner with the opportunity to carry out some tuning.

As with the Bitter SC, the Bitter CD Diplomat is a rare car, making it an ideal acquisition for a collector. If we were in the market for one (and we would if the funds were available) we would want to inspect this example in person. Its rarity warrants the time to investigate further this slice of German sports car history. The CD is a fascinating design and we love its sweeping profile. It really is fabulous. With its V8 and 2+2 format it would make for a great long distance tourer. It is also one of those heading turning cars whose identity will confuse most if not all but the sharp eyed enthusiast. If we were buying this CD we’d restore the front seats and look at tuning the V8. And if this one proves to be good, we’d snap it up very quickly before it disappears into another collection.

This Bitter CD Diplomat is located near Munich in Germany and the current bid is £5,100.

See our feature for a rare Opel Commodore GS 2800 Coupe