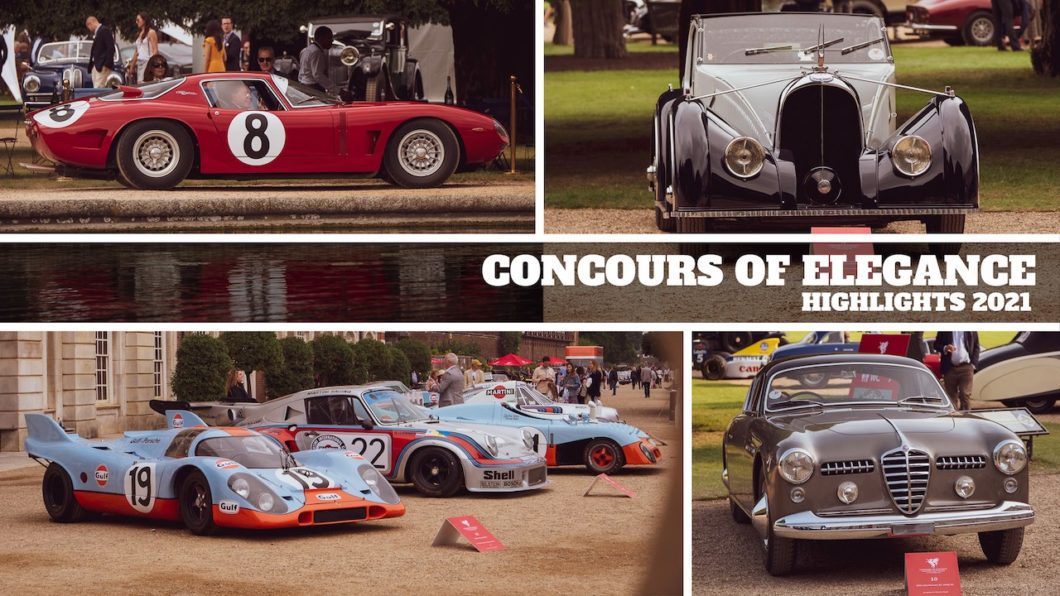 The Concours of Elegance 2021 gathered a dazzling display of automotive jewels at the historic Hampton Court Palace over the weekend. The three day event, which opened on Friday 3rd September welcomed a record number of guests who enjoyed the finest line up of vehicles yet.

The stunning Main Concours display comprised of the iconic Gulf and Martini livery Porsche race cars from the 1970s, who greeted visitors at the gates to The Great Fountain Garden. Gulf and Martini are among the most evocative brands ever associated with motorsport and their support for Porsche’s racing efforts helped create some true legends.

Central to the display was the 1970 Porsche 917K, number 19, the very car that was campaigned by Jo Siffert and Derek Bell at Sebring and Richard Attwood and Herbert Müller at Le Mans.

It was joined by its smaller sibling, the 1971 Porsche 908/3. The more compact and lightweight racer worked in conjunction with the 917 during the 1971 season, where it was used for winding courses such as the Nürburgring and the Targa Florio.

The final Gulf livery racer on display over the weekend was the Ford V8 powered 1975 Gulf Mirage GR8, which was driven by Jacky Ickx and Derek Bell to victory at the 24 Hours of Le Mans.

Rounding of the special Gulf presentation was the mighty Mercedes-Benz transporter which was used in period by the Gulf-JW Automotive team in 1971 to take the Gulf-JWA Porsche 917s to Le Mans.

The battle of the motorsport liveries continued with the presentation of some notable Martini racers, which included the fantastic 1973 Targa Florio-winning Martini Racing Porsche 911 Carrera RSR prototype. It also took victory in the 1973 Daytona 24 Hours.

Next up was what is perhaps the wildest and most recognisable of the Martini 911s, the mighty 1974 Carrera RSR Turbo. The imposing wide body styling and the monster rear wing made this 500BHP beast hard to miss at the entrance to the garden. This particular car was raced by Herbert Müller and Gijs van Lennep at the 1974 Le Man 24 Hours, where it finished second.

Rounding off the impressive livery display was the fantastic 1976 Porsche 936/77. The hand painted Martini stripes and the gleaming white paint enhance the flowing lines of the aerodynamic open cockpit racer. It won the 1977 Le Mans 24 Hours, with Jacky Ickx, Hurley Haywood and Jurgen Barth at the wheel. It returned to Le Mans in 1978, finishing second.

Another stand out display which was located just behind the main Concours stage was the impressive Bizzarrini stand. The relaunched marque had brought along not only some of its historic cars, but also some of its period transport vehicles. The presence of the Bizzarrini 5300 GT Strada, the P538 V12 and the P578 V8 from the company’s collection was impressive in its own right and re-emphasised the brilliance of Giotto Bizzarrini.

However the addition the Fiat 684 racing transporter and Fiat 238 ‘Scuderia Bizzarrini’ van really were the icing on the cake, making the Bizzarrini stand hands down the best display at the Concours of Elegance.

The calibre of the collector cars on display at Hampton Court this year was exemplary and one of the most beautiful stand out rarities was this breathtaking 1950 Alfa Romeo 6C 2500 SS, which features a one off body by Ghia.

This particular car is one of four bodied by Ghia using its Supergioiello – or ‘Super Jewel’ – coachwork. It is believed that three of the cars were built on an Alfa Romeo chassis, but this car was the only one built on an advanced tubular chassis which was produced by Gilco. It is powered by a 2.5 litre triple Weber carb straight six which is believed to have been ordered new in Super Sport specification. It was one of Take to the Road’s favourite cars a this years show and was simply stunning from every angle.

Continuing with the Italian theme was one of the finest race cars ever crafted by Alfa Romeo, the Giulia TZ2. The example on show was the most successful of the Ercole Spada penned Zagato bodied racers. This particular car took home class victories in 1966 with Autodelat at the Nurburgring 1000km, Trento-Bondone and Circuito Del Mugello. It’s most famous result was fourth overall and first in class at the 1966 Targa Florio, again with the Autodelta team. Every angle of this race car is a work of automotive art.

Special mention also has to go the Aston Martin Bulldog which was making its first public appearance after an extensive restoration. The 1970’s one off concept car was originally built to crack the 200MPH barrier. The superb British wedge was designed by William Towns and achieved 191MPH at the MIRA track in late 1979. However the project was cancelled with the prototype then being sold off having failed to fulfill its goal. It spent numerous years in various collections, before being acquired by its current owner who decided to restore the car with the intention getting it to its original target speed.

The Aston Martin DPK901 Bulldog was restored just in time for the Concours of Elegance and will now be put through a series of shakedown tests, before racing driver Darren Turner attempts to reach the 200MPH target later this year. This will be one to watch!

The automotive jewel that dazzled at the Concours of Elegance 2021 however was the glorious 1934 Voisin C-27 Aérosport. Designed and built by one of the greatest geniuses of the 20th Century, Gabriel Voisin, the C-27 Aérosport exhibits many traits of Voisin’s aviation background.

It was a sublime example of French Art Deco automotive design and highlighted Voisin’s innovative approaches to  automotive engineering. It was inspired by the Voisin Aerodyne which was built specially for the 1934 Paris Motor Show. The Aérosport was created on a shortened Aerodyne and was powered by a 3.0 litre straight six engine, which was noted for its smooth operation. It also featured a sliding roof which was powered by its own motor which was run off the engine.

The rare Voisin C-27 Aérosport was restored by marque expert Philip Moch, which was a challenge as much of the original coachwork had been replaced by a later body. And the restorers only had three period photographs of the car to work with. It was hardly surprising that the restoration took three years, but the result was a triumph.

Today the C-27 Aérosport is owned by Peter Mullin, the founder and patron of the Mullin Automotive Museum in California. The car made the trip across the Atlantic and was rewarded with the Voisin C-27 Aérosport taking home the prestigious Best in Show award. A fitting result for a truly wonderful car.

After a superb three days at Hampton Court, the Concours of Elegance is over for another year and will return on 2-4 September 2022.

Additional Photos from the Concours of Elegance 2021