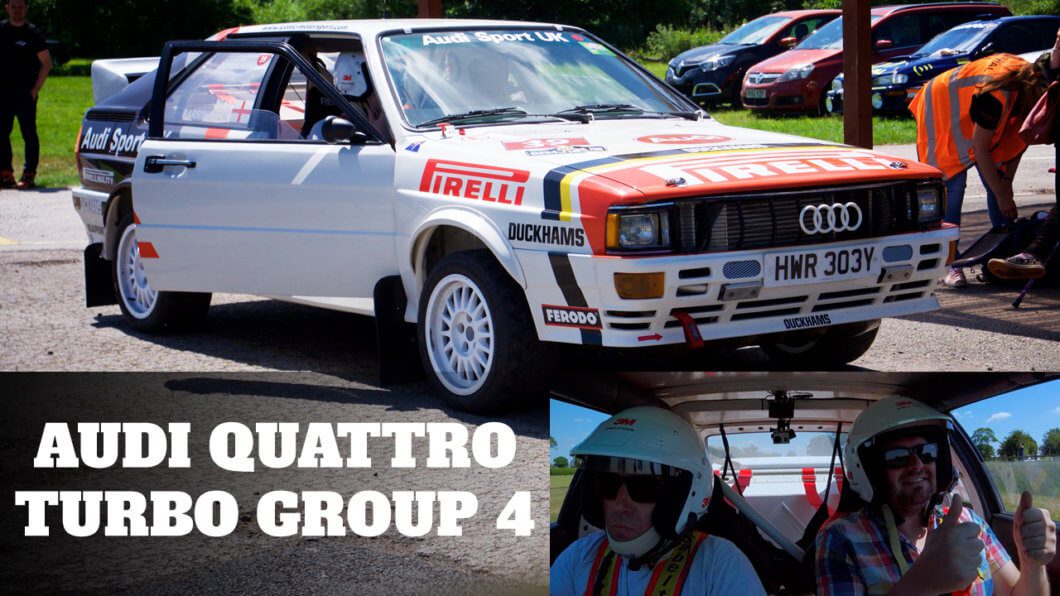 This video and article is sponsored by Duckhams

On Friday 22nd June I ventured north from my base in the south east of England to the secluded Curborough Sprint Course just north of Birmingham. The 6r4.net Club were holding their annual private track day for club members and invited guests. My invite very kindly came from club co-founder Dan Ellmore. You may remember Dan took me for a spin in his Metro 6R4 in Italy last year. That didn’t run didn’t go quite to plan as the pocket rocket developed a clutch problem. So the plan was to have another go at Curborough. This time round delays installing a new steering column meant Dan couldn’t bring his Metro 6R4. Which was a shame. But to make up for it he pointed me in the direction of a certain Audi Quattro Turbo Group 4 Rally Car.

One of the fantastic things about the 6R4.net track day was the shear number of Group B Rally Cars present. There were lots of Metro 6R4’s as one would expect. At one point there were ten lined up in the pit area. But the event wasn’t just for bonkers powered Metro’s.

As the spectators arrived on that sunny morning, so did the trailers carrying a mount watering selection of historic rally metal. There was a Renault 5 Maxi Turbo, a Ford RS200, a Ford Escort Mk2. an Opel Manta, a super rare Vauxhall Astra 4S Prototype and of course the Audi Quattro. It was a feast for the eyes… and ears!

Dan introduced me to Nick, the owner of the Audi Quattro. A plan was quickly drawn up to film the car and Nick very kindly offered me a passenger ride! I was like a kid in the candy store! So during the morning session I watched and filmed the cars race around the track. And one thing stood out about the Quattro… it looked insane!

For me I was partly basing my experience of the Audi Quattro on the Audi UR Quattro I drove back in 2016. Obviously you can’t compare a fast road car to something built to Group 4 rally specification. That extra 200BHP really does make a difference. But this Group 4 spec Quattro is a completely different beast.

The flared arches give it a muscular look and the ride height hints at its rallying suspension setup. And then there’s the period correct Audi Sport UK and Duckhams livery. It is an iconic look!

But as I filmed the Quattro hammer round the track I was amazed at how it did so. This was a snarling, barking, spitting beast that chewed up the track. It was angry and loud and it attacked every corner as a sledge hammer attacks a block of ice.

It was like a caged animal that had been released and was now enjoying the rampage and carnage it was creating. That was the impression the Audi Quattro was giving just from the side of the track.

So when I climbed into the beast I knew I was in for an experience. As the car waited its turn in the queue for the track, owner Nick mentioned he’d built the car himself from the ground up. He started with a solid standard road Quattro and spent seven years building his Group 4 machine. And thanks to the turbo and lots of tuning, his rally machine was pumping out over 400BHP!

Well my three laps of around the Curborough Sprint Course was a bit more than an experience… it was an assault on the senses! The moment Nick launched the Quattro off the line the whole car bucked and twitched side ways. It felt like every part of the car was fighting to break free. The tyres screeched as the four wheel drive system clunked and fought to keep the car on the track. Added to that was the whoosh noise of the turbo. Even though my head was banging against the roll cage on pretty much every corner, I still had a smile on my face.

I was smiling because it was just unreal how mad this car is. And the best was yet to come when Nick used the Scandinavian flick to get the Audi Quattro to turn in. Basically this meant turning left as he approached the corner and then sharpy turning right. As you can imagine in a front engine car the pitch and lurch forward is stomach churning. It just feels unnatural.

Nick mentioned afterwards you have to have faith that the car will bring itself round. It always does because the 4×4 system kicks in and saves the day. But its that initial fear of steering in the wrong direction to go in another direction… and I had no steering wheel in front of me!

After the three laps came to an end, the first word that entered my mind as we headed back to the pits was “animal”. Yes this car is an absolute animal. Or as Nick put it “it’s a bit of a handful”. I can only imagine what it must be like on a forest rally stage. Bring it on I say!

Thanks to owners Nick and Tom Barrington of Iconic Motorsport for the Audi Quattro experience. Thanks to Dan Ellmore and Nicky Lindon for the 6R4.net track day. And thanks to Aspection Photography for the on track photos.

Additional Photos of the Audi Quattro

40 Years of the Audi quattro