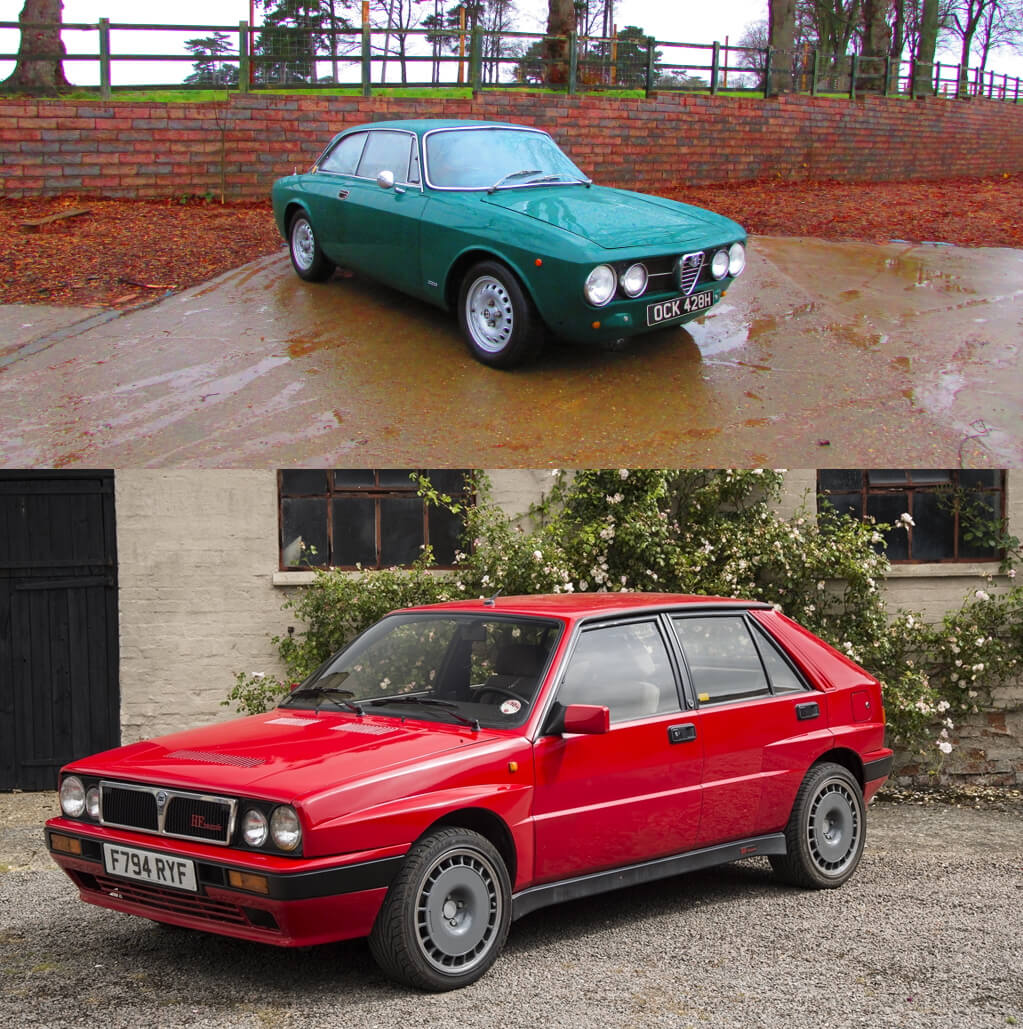 We have a thing for Italian cars, especially those that combine performance with iconic looks. Which is why we felt we had to write a piece on the Alfa Romeo 1750 GT Veloce and the Lancia Delta HF Integrale coming up at Classics Central Auctions this weekend. Both are fine examples of the great performance cars of their eras and we take a look at what makes them appeal to us.

First up is the 1970 Alfa Romeo 1750 GT Veloce. Our second ever feature film (watch it here) was with a superb 1750 Spider Veloce, which gave us a flavour of the performance and the grace of Alfa’s legendary series. While the convertible was penned by Pininfarina, the GT was designed by their great rival Bertone. And it is the 2 door GT coupe that really excites performance Alfaholics.

This particular 1750 GT Veloce is finished in Moss Green and is described as being in excellent condition. It has received numerous upgrades and the listing states it has been upgraded to fast road spec. It is said to perform strongly and has excellent road holding.

On the inside the Wild Boar tan leather interior is said to be in excellent shape and is complimented by the classic wood rimmed steering wheel. The listing notes that the car has covered 22,500 miles which is not warranted and that it comes with a letter of authenticity from Alfa Romeo.

For us their is nothing better than an Alfa Romeo 1750 GT Veloce which has been de-bumpered. Just removing the bumpers on Bertone’s masterpiece transforms the look of the car, adding a touch of aggression to the elegant curves of the compact GT. It is a classic look and one favoured by many Alfa GT fans. For us the stance is just right. Not too low and not too high which gives the GT a more purposeful look. And we have to say it is nice to see this particular RHD example finished in green. It makes a change from the more common red that we see on Alfa’s of this period. Based on the performance of our film car 1750 Spider, we expect this GT Veloce is very quick.

More details on this Alfa Romeo 1750 GT Veloce can be found on Classic Centrals website.

This particular Delta HF Integrale is described as being in very good condition and comes with a detailed service and maintenance file. The listing mentions £8,000 spent with Lancia specialists Richard Thorne and also notes Automobile Club d’Italia build records.

This 4WD road going version of the rally legend looks to be in good shape indeed with a nice clean exterior and a clean engine bay as well. With so many trashed and wrecked over the years, it is getting harder to find clean, unmolested Delta Integrale’s. And this one looks like it has been cared for. The interior looks very clean as well which is a major plus.

With prices of Lancia Delta Integrale Evo’s going as high as the Group B rally cars jumps, this 8V Delta HF Integrale is an opportunity to own a slice of that legendary rally heritage and performance, at a fraction of the price. With permanent 4WD, that lively 2ltr engine and the famous Garret Turbo, this is one hot hatch that begs to be driven on a twisty road.

More details on this Lancia Delta HF Integrale can be found on Classic Centrals website.

So which one would you choose?

In the best of both worlds, we’d have both. But if we really really had to choose, we would lean towards the Lancia. There’s not much in it though!