We’ve just spotted that the 1973 Iso Fidia with that infamous interior is now back on the market after it sold for £7,000 at Historics at Brooklands Auctions last year. 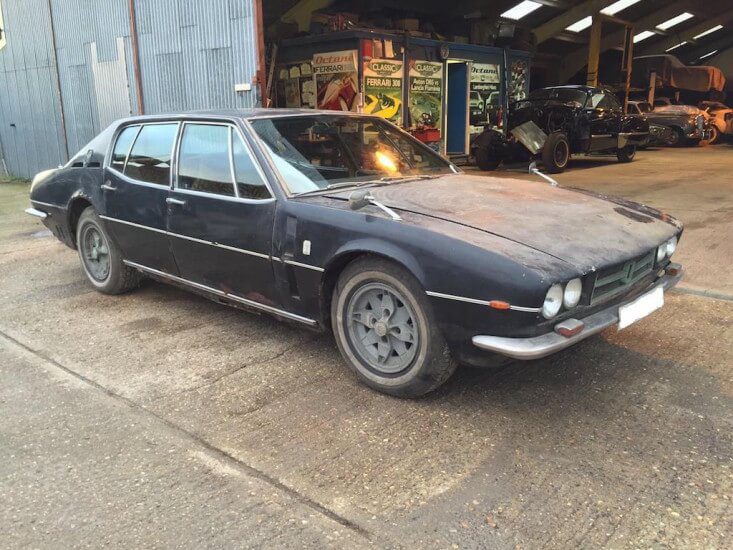 This time the seller includes a lot more detailed photographs of the car, which allows us to appreciate even more that rather unique interior. Since it was sold at auction nothing appears to have been done with the car. So it is in exactly the same unrestored, non running state it was in when originally offered at Historics.

The Fidia is not the most beautiful Iso ever. We find the lines somewhat clunky and the over all profile doesn’t flow particularly well. Plus there is that interior trim which is very, well, in your face. However this is a very rare Fidia and it deserves to be restored and put back on the road. With so few built and with the first example owned by John Lennon, the Iso Fidia has a certain appeal.

Looking back over the original article and the new batch of photos, we spotted a couple of things that we hadn’t noticed before. First when you compare the old period photo of the interior you’ll notice that the lower half of the dashboard is covered in the velour fabric. This was then changed at some point to leather, to match the top half of the dashboard. Perhaps the owner felt they needed to tone it down at bit up front. The original listing also didn’t show (because photos weren’t supplied) that the rear door cards are blue and don’t match the front door cards.

While restoration of this luxury four door saloon will be costly, there is some comfort in knowing that the Ford powerplant and transmission are relatively robust and easy to find parts for. As for the interior, as bad as it is for the eyes, we would go to the trouble of re-trimming it in the original pattern, just to keep things original and faithful to the original specification.

More details on the auction can be found here on eBay.

The Iso Fidia is a rare luxury saloon curiosity from the the late 1960s. Its design is almost as curious as the diverse history of Iso Autoveicoli S.p.A itself (they started making fridges before moving to motorcycles, then came the Iconic Isetta bubble car, before jumping to V8 powered supercars). The Fidia saloon was the first project developed by Piero Rivolta, who had taken over the firm after the death of his father Renzo Rivolta in 1966.

Like the Iso Grifo and the Iso Lele, the Iso Fidia used the same successful format. Italian design and style mated to American V8 muscle. The design of the new luxury four door saloon was once again entrusted to Giorgetto Giugiaro at Ghia (he had already penned the stunning Iso Grifo). It was essentially a more practical version of the Iso Rivolta, on which it was based.

Power was supplied by Chevrolet in the form of a 5.4 litre 355BHP V8, making the Fidia one of the fastest luxury saloons in the world. Its interior was the height of luxury with lashings of hand stitched leather and elegant dials and switches. Presented at the Frankfurt Motor Show in 1967, its image suffered a setback during its Athen Press launch in 1968. The local low octane fuel didn’t agree with the Fidia’s V8, resulting in motor journalists reporting it suffered from excessive pinking. Despite this setback, the unusual saloon gained celebrity status when the first right hand drive model and the second car built, was purchased by John Lennon.

In 1973 the Chevrolet power unit was replaced by a Ford 5.8 litre 325BHP V8. The new engine was supplied with Ford’s “Cruise-o-matic” automatic gearbox, which complimented the ZF five speed manual transmission. The change was ultimately short lived as the Italian firm was in financial difficulties. Only 35 Ford V8 powered models were made in a total production run of 192 from 1968 to 1972. Unable to adapt to the 1970s oil crisis, Iso were declared bankrupt in 1974.

The Iso Fidia being offered at Historics at Brooklands August sale is a rare right hand drive model built in 1973. The details state that is has been with the same family since its purchase in 1979. Its last MOT certificate was issued in 1984 and the car has been in storage ever since. While it was in storage, the car was started and the engine run periodically. It hasn’t moved for 15 years but the engine has not seized apparently. It is also said to be complete.

As restoration projects go, this Iso Fidia is one for the brave. One look at the garage it has been stored in had us recoiling in horror. As classic car enthusiasts there is nothing worse than seeing a garage with a thin, flimsy plastic sheet roof that has ivy coming through it. Dry storage this is not! Who knows what rust horrors lurk within this slumbering Italian rarity. The door bottoms and sill on the passengers side are clearly gone so one can assume the drivers side is the same. There is also rust evident on the rear wheel arch. It is wearing its period correct alloys (which also appeared on the Lele) which are interestingly shod with part whitewall tyres. The rear bumper also appears to be at a slight angle.

While we found the conditions of the garage to be a shock, we really weren’t prepared for the interior photo. Iso were known for their high quality hand stitched leather interiors. They were the height of luxury at the time. So the velour type material used on this Fidia, with its garish colour and pattern was really not what we expected to see. We honestly don’t know what to make of it. Its one of those “my god it is hideous but we can’t stop staring” scenarios. No photos of the rear seats are supplied (normally we would complain but this time we won’t). At a glance the dashboard appears intact and this one is clearly an automatic. There is also a jumble of wires behind the gearbox which may be related to the stereo (though these were usually mounted in the centre of the dash). The steering wheel does not appear to be a factory original however which is a shame.

For us, Iso were at their greatest when they developed the Rivolta and the Grifo. Much like the Lele, the Fidia is a clumsy mix of styles. The front echoes the Grifo but the rear profile with its massive A pillar looks ungainly and out of proportion with the rest of the car. It does have a very low and aggressive stance which suits the cars V8. But this puts it slightly at odds with its luxury image. You could say its styling is more bold than the restrained yet more elegant looking Maserati Quattroporte (its main rival). But it does lack the purity of the Rivolta and the Grifo. We would have forgiven this example if it had featured an a typical leather interior. The garish style used on this one is too much for us.

That said this Iso Fidia is a rare beast. Values for good examples are no where near the levels of a good Iso Grifo (see our article on the Iso Grifo 7 Litre). And you can be guaranteed that this restoration will take significant investment to get it back on the road. Fifteen years in a damp garage are not ideal conditions for any car to be stored, especially a hand built Italian one. On the plus side the Ford V8 and gearbox rebuild shouldn’t be too difficult to rebuild though this is probably its only saving grace. But that could prove to be the least of the new owners worries. It is just as well it is being offered with no reserve.

Despite the interior and its awkward looks, we are still intrigued by this one. We would buy this beast to save it. Then we’d restore it, sit back and wonder where it all went wrong for Iso. And why its first owner chose that interior.

More details on this Iso Fidia can be found on Historics at Brooklands website.