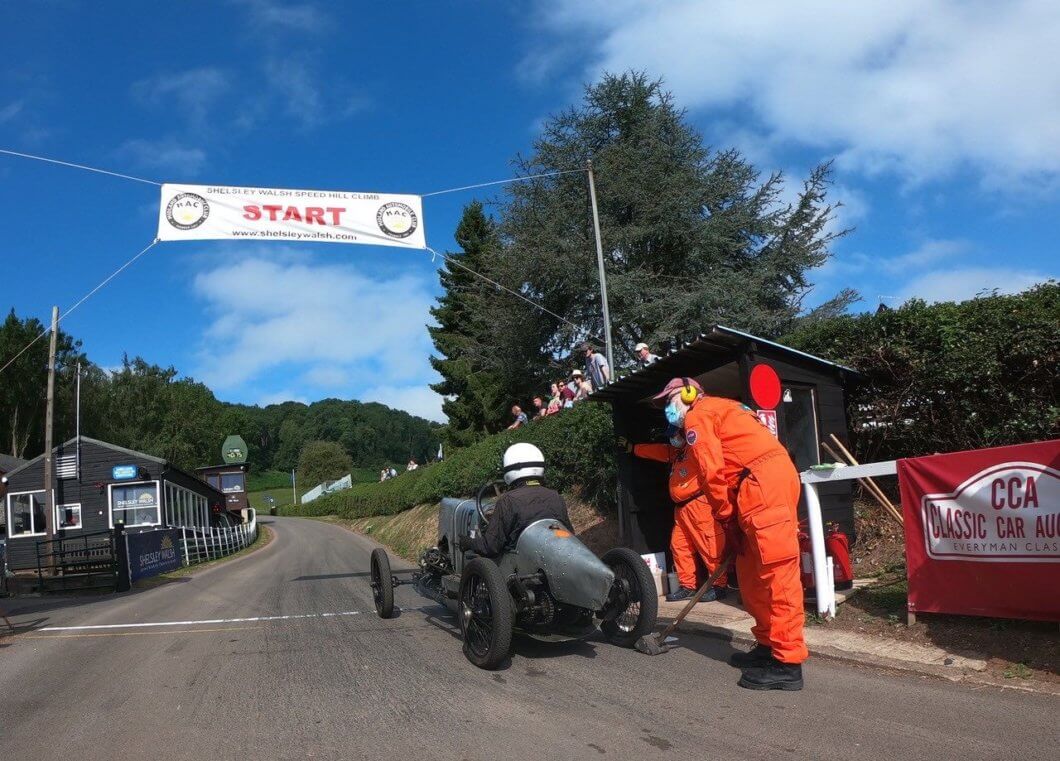 A second weekend of 2020 track action took place at Shelsley Walsh with two meetings over the weekend of 8-9 August. The annual Vintage VSCC day was held on Saturday and was followed by the Reg Phillips Trophy meeting on Sunday, as drivers got back in the seat and sharpened their skills up the 115-year-old hill.

Both events were held behind closed doors as the Midland Automobile Club ensured safety for all, and the sun flooded the beautiful Teme Valley all weekend to make the freshly cleaned 1000-yard hill as good, quick and grippy as possible. All drivers therefore enjoyed the full ‘feeling’ of Shelsley and speed hill climbing.

The ever-quick James Baxter won the VSSC meeting with superb consistency over his two runs – he twice recorded 34.80 seconds in the Riley TT Sprite. A host of new drivers also attacked the hill, including Charlotte Bowyer, who shared the family Lea-Francis P Type with father Simon.

The stunning class of Shelsley Specials included the GN BHD, the Becke Powerplus and the simply incredible 97-year-old Spider, which first took the outright record at Shelsley with Basil Davenport in 1926. David Leigh was again at the helm of the car that utterly epitomises the pioneering spirit of hill climbing to this day, fresh from a winter engine rebuild and quickly getting back into the groove after all drivers had a bonus practice run.

Several competitors from the vintage day stayed over as modern cars joined them for the Reg Phillips Trophy meeting on Sunday. David and Allan Warburton made it a family one-two in their Gould GR59 with times of 25.12 and 26.78 seconds respectively after a cool start and a sunny end to the day. Harry Pick chased hard, posting a best time of 27.11 seconds with a very impressive run, his 1100cc OMS singing its way to the top.

The stunning Type 51 Bugatti of Edmund Burgess whirred its way up with the supercharger noise echoing through the Worcestershire trees, and the Freikaiserwagen that ran at Shelsley pre-war also made a return.

Motorcycles took centre-stage, too, with a thrilling series of runs. Tom Short won the Run Off at the end of the day with a 30.78-second climb on his 653cc KTM SMR, in amongst a cacophony of V-twins, triples and fours. Well-known names from the four-wheeled side of the paddock took part – Steve Owen of OMS rode his Moto Guzzi Airone, while Bill Chaplin from Empire Racing Cars rode the Isle of Man TT-winning sidecar from 1995, with brave mechanic Ronnie King as passenger.

However, it was the little Mini van of Adele and Ian Hunt that raised many a smile as they entered the brand-new Commercial Vehicles class, which took place for the very first time in the UK. The Hunts had recently learned a few Shelsley tricks, having attended the hill’s driving school the previous week.