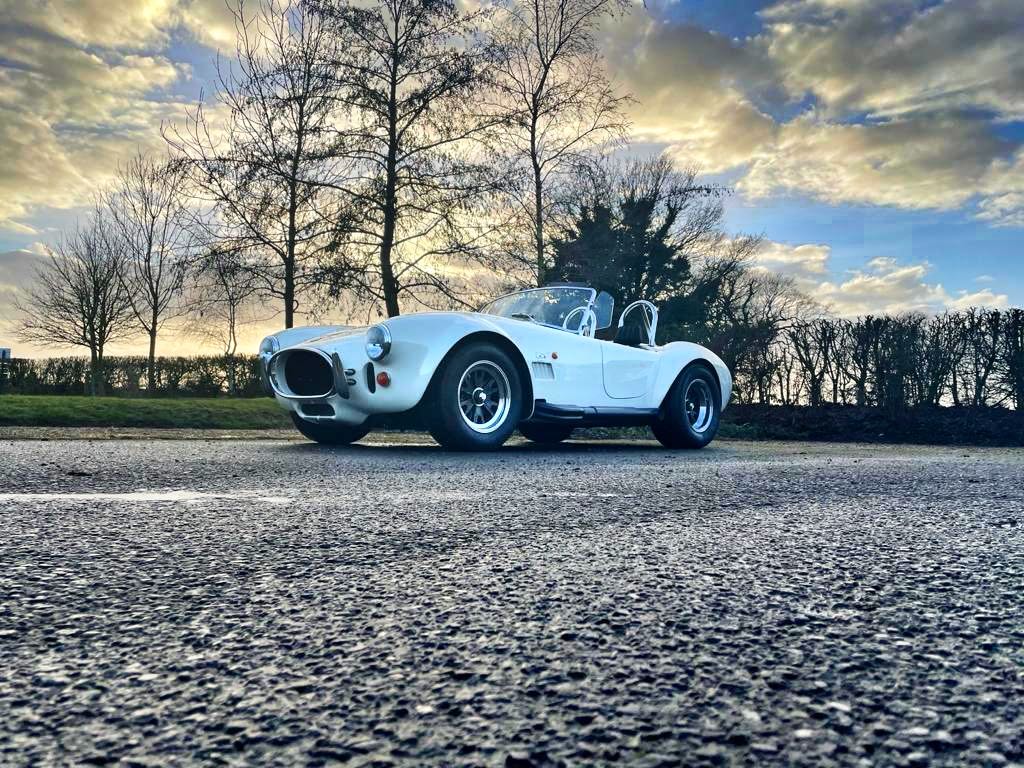 AC Cars is celebrating its 120th birthday with a special production run of 12 AC Cobra Superblowers. In the coming months the firms mighty Cobras will be going fully green, with innovative high performance electric drivetrains. These new EV powerplants will maintain the legendary Cobra reputation for speed and power, but will be almost silent. This move away from the venerated V8 will be a momentous moment in automotive industry history.

The celebration suite of cars is finished in a striking livery which comes complete with the famous centre of the bonnet and boot stripes which mark the glory years of its racing pedigree. But for AC this 120 heritage Cobra is about much more than a paint job.

The 12 cars celebrate 12 decades of AC Cars being in business, with many important milestones, including the first 2-litre car to do 100 miles in one hour…100 years ago in 1921…the launch of the revolutionary light AC Ace in the 1950’s which led to famous AC Cobra in the 1960’s.

Some typically pithy and descriptive words were aired about the AC Cobra in the official catalogue for the first ever ‘Car of the Century ‘ Awards ceremony held in 1999 (the Cobra was one of 200 contenders for the top prizes judged by an all-star committee chaired by one of the motor industry’s true giants, Robert A (‘Bob’) Lutz, formerly the overall boss of – at different times – Ford, General Motors and Chrysler). Here are just two examples:

“The Cobra captured the imagination of performance car fans all over the world. It was perhaps the ultimate expression of the old American belief that ‘there’s no substitute for cubic inches’.

“It’s an interesting footnote that in fact it was not power that the Cobra needed for international racing success – it was aerodynamic efficiency.

However, this current decade will probably see the last V8 ICE cars, so there can be no better way to celebrate this than with one of the most famous V8 cars in history, the AC Cobra. These 12 AC Cobra Superblower’s are possibly the quickest production AC Cobra’s ever built and are powered by a 580 bhp supercharged V8 engine.

But what makes an AC Cobra both magic to own and distinctive to experience?

There are several answers to that question, all linked to how the brain of the owner and beholder sees this part iconic car, part art object. It’s certainly in the shape of the gorgeous, sculpted curves of the bodywork and for many its distilled in the amazing sound its traditional 580 horsepower V8 engine makes. Both the shape and the performance will hopefully be with us for many years to come. But that distinctive sound and the engine which makes it will be changing soon along with the rest of the industry as AC goes green.

You don’t see a new AC very often because not many are built and each car is finished with loving devotion to match the requirements and expectations of its customer. What you‘re getting with an AC Cobra is some history, some heritage and – in large measure – power and performance. It’s a thrilling blend of adrenaline rush, excitement and motoring pleasure at its most unsubtle.

Alan Lubinsky, the man who has kept AC alive over more than two decades despite some of the toughest trading conditions imaginable, has few fears about the end of the ICE age. “We are confident in the future because we have moved quickly and have put in place a new powertrain which can meet the challenges of the impending legislation changes while retaining the true essence of the AC Cobra’s unique appeal – appearance and ultimate performance”.

Alan Lubinsky: “We are near the end of an era. In time we’ll be saying a final farewell to the iconic AC Cobra. My question is: Will we ever see (and hear) its like again? My answer is – these celebration cars guarantee that the legend that is the AC Cobra will live on into the future and outlive the ICE Age. We are looking forward to selling a truly hot car in a sunny climate.