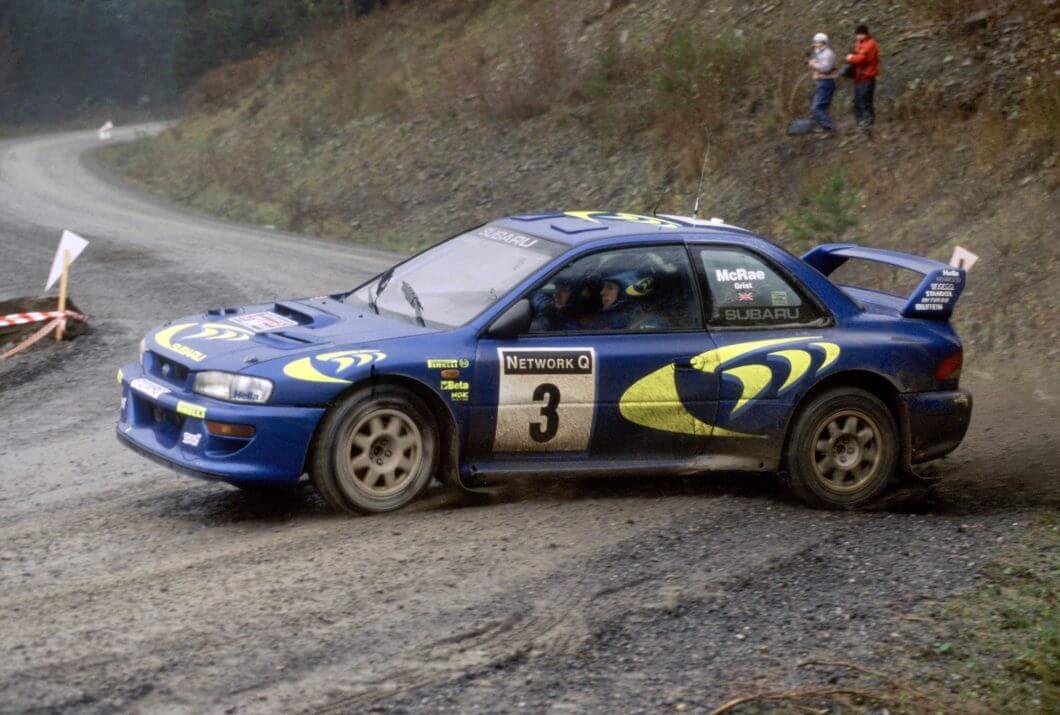 What started life as the Royal Automobile Club Rally way back in 1932 has evolved into today’s Wales Rally GB, the UK’s round of the FIA World Rally Championship.

This year’s high-profile event takes place between 3-6 October and the 75th anniversary display – which also features a large number of audacious monsters from the hallowed Group B era, – is one of the many highlights on offer to those attending the rally’s opening competitive stage. This showpiece is set for Thursday evening at the Oulton Park circuit near Cheshire.

Though 2017 victor Elfyn Evans is hoping to join them shortly, to date Clark, McRae and Burns are the only British drivers to have racked up multiple victories on home soil since the rally moved into the forests at start of the sixties. Clark won in 1972 and 1976, McRae in 1994, 1995 and 1997 followed by Burns’ hat-trick between 1998 and 2000.

Eye-catching Escort RSs and Subarus hailing their famous victories are certain to be headline grabbers in a one-off display paying homage to the event’s incredible heritage. It’s an impressive time-travelling line-up which also includes examples of the Lanchester 15/18 that won the first event as well as victorious Saabs, Minis, Fords and Peugeots (see below for full list of display cars).

The Rally GB journey which started with 341 crews in unmodified road cars motoring to Torquay from nine different points around the UK, evolved with the gradual introduction of more competitive driving tests and came of age when Scandinavian style off-road forest stages were introduced at the start of the sixties.

In 1973, the event’s international repute earned it a founding position in the newly created FIA World Rally Championship and, together with Finland, remains one of only two rounds that have featured on every year’s WRC roster ever since. So, true to say Wales Rally GB has form!

Adding to the sense of history, the showcase is supported by Autocar magazine, one of the driving forces behind the inaugural Royal Automobile Club Rally of 1932.

The Autocar 75th Rally GB Display is just one of the many highlights on offer to all those attending the first competitive stage of the 2019 Wales Rally GB. The WRC action blasts off at 7pm but, with gates opening at 3pm, a full afternoon of entertainment whets appetites for the floodlit spectacle to follow.

Stunt driving shows, autograph sessions with the current generation of star drivers, a free children’s funfair plus a host of other fun-filled activities are sure to keep all ages enthralled.

Further fuelling the 75th celebrations, cycling legend Sir Chris Hoy will be paying tribute to his boyhood hero Colin McRae when doing demonstration laps in another of the renowned Scot’s rally winning Subarus.

Tickets for the opening Dayinsure Oulton Park Stage are only available in advance and must be purchased before midnight on 31 September. These, as well as a wide range of ticket options for the following 21 action-packed stages are available – prices start at just £15 for the Saturday evening family-friendly speed test in Colwyn Bay. Full details can be found on the official Wales Rally GB website.

1932 Lanchester 15/18
No fewer than 342 competitors entered the first Royal Automobile Club Rally and, although there was no official winner, the £25 first prize was awarded to Colonel A. H. Loughborough driving a Lanchester 15/18. Sadly, that car has been lost to history, but the Autocar 75th Rally GB display will feature a similar surviving model.

1933 Singer 9 Sports Coupe
F R G ‘Bob’ Spikins was a star of the first few RAC Rallies. He won outright in 1934 driving a 9bhp Singer two-seater Sports – a car he then developed into a supercharged Brooklands racer. A year earlier he finished third overall, and second in the under 10bhp class, driving a Singer Coupe – the car on show at Oulton Park.

1965 Mini Cooper S
The evergreen Mini celebrates its 60th birthday this year and while the iconic little gamechanger earned its kudos on Carnaby Street, it earned its spurs on the world’s rally stages. Straight from the swinging sixties comes Rauno Aaltonen’s victorious Cooper S – the only Mini to win the RAC Rally.

1971 Saab 96
With its Scandinavian heritage, Saabs were very competitive rally cars in period notching up five wins in the British forests between 1960 and 1971. The first three went to the legendary Erik Carlsson, the final one to the original Stig – aka Stig Blomqvist. On display will be an evocative replica of his victorious V4 machine.

1973 Toyota Celica
Toyota has a long history of rally success and its latest Yaris WRC is the one to beat in this year’s world championship. Back in the day, Ove Andersson ­– the man who later ran the Japanese company’s WRC, Le Mans and F1 teams – finished 12th in the 1973 RAC Rally driving this St Bruno backed Celica.

1974 Toyota Corolla/Levin
Toyota came close to its first RAC Rally podium in 1974 when Björn Waldegård finished an encouraging fourth in this two door TE27 Corolla coupe model equipped with a sporty four-valve engine. Back then, the gruelling rally adventure had 84 competitive stages throughout Wales, England and Scotland.

1974 Lancia Stratos
For many, the sweet-sounding Ferrari V6-powered Lancia Stratos HF remains the ultimate rally weapon of the seventies. It won the World Rally Championship for Makes three-times between 1974 and 1976… but never the RAC Rally. Sandro Munari finished third in 1974 and this more modern Hawk replica pays homage to that result.

1976 Escort RS1800 Mk2
The switch to gravel tracks in the forests plus a wintry, end-of-season date resulted in 30 years of Nordic success only interrupted by Roger Clark’s two famous home wins in 1972 and 1976. Those successes are celebrated in the Autocar 75th Rally GB display by the presence of an eye-catching replica of Clark’s red Mk2 winner from ’76.

1977 Escort RS1800 Mk2
Back in the Seventies, the Ford Escort RS was the rally car of choice – its spectacular sideways style entertained both drivers and crowds. As well as the Clark homage, Björn Waldegård’s triumphant British Airways backed machine from the following year will also be flying the Ford flag in the Autocar 75th Rally GB showcase at Oulton Park.

1980 Toyota Celica 2000GT
1980 is best remembered for Henri Toivonen’s stirring victory in a Talbot Sunbeam Lotus – the last on the RAC Rally for a two-wheel-drive machine. But victory only came after an oil filter failed on Björn Waldegård’s rally leading Toyota just after half-distance. The errant Celica is another of the significant cars on show at Oulton Park.

1984 Porsche 911 SC RS
Porsche may be more famous for its sportscar antics, but the 911 also made a decent rally car. Roger Clark finished 11th in a Rothmans-liveried 290 bhp Group B spec SC RS in 1984. The Group B 911 was first competition car entered by Prodrive, the crack preparation company which was behind many of Subaru’s and Colin McRae’s success in the years to come.

1984 Nissan 240RS
Like the 911 SC RS, the Nissan 240RS was one of the early examples of the WRC’s all-too-brief box office Group B ‘Godzilla’ era. Its rear-driven chassis was quickly surpassed by more extreme four-wheel-drive machines from Audi, Lancia, Peugeot et al. The 240RS being displayed at Oulton Park is the sister car of Terry Kaby’s Nissan Team Europe entry which finished seventh in 1985.

1986 Peugeot T16 EVO
Peugeot was one of the first to fully exploit the almost limitless Group B regulations when unleashing the mid-engined, four-wheel-drive 205 T16. It won two RAC Rallies before the wild formula was famously banned following a number of fatal accidents involving both crews and spectators. Ari Vatanen won in 1984 while Timo Salonen won Europe’s final WRC rally of the epic Group B era in 1986. With its huge wings, the T16 EVO displayed at Oulton Park is one of the sport’s true icons.

1986 Ford RS200
Rally fanatic Ford responded to the no-holds-barred Group B regulations by producing the purpose-built, mid-engined RS200 supercar. Though still being developed when Group B was outlawed, Stig Blomqvist briefly led the 1986 RAC Rally before being forced out with turbo issues. The final RS200 ever built (chassis #200) is loaned to the Autocar 75th Rally GB display by the Ford Heritage Centre.

1986 MG Metro 6R4
Another of the outrageous Group legends was the V6-propelled, 400+ bhp MG Metro 6R4 designed for Austin Rover by the Williams F1 team. Its best-ever result was Tony Pond’s patriotic debut third place on the 1985 RAC Rally. A year later Jimmy McRae finished eighth in the Rothmans liveried icon on show to those at Oulton Park. Five-time BRC champ McRae will be present, too.

1993 Skoda Favorit
Despite languishing behind the Iron Curtain, plucky Škoda kept its chin up throughout the seventies and eighties by rallying some of its rugged road cars. It had notable successes, too, notably on the RAC Rally where it took under-1300cc class honours for 17 years on the trot. This 1993 factory-run Favorit will represent the Czech company’s unrivalled winning-run in next month’s 75th Rally GB showcase.

1997 Subaru Impreza WRC
With their iconic blue bodies and gold wheels, Subarus dominated Britain’s revered round of the FIA World Rally Championship at the turn of the century notching up nine wins between 1994 and 2004. The legendary Scot Colin McRae scored three of those and his 1997 winning Impreza WRC joins the Oulton Park showcase, while Olympic cycling legend Sir Chris Hoy will be putting another of Colin’s cars through its paces on the track.

2000 Subaru Impreza
In what was a golden period for British rallying, Richards Burns mirrored McRae with three stirring Rally GB wins of his own between 1998 and 2000. He also became England’s first and only World Rally Champion when strolling home third in 2001. Burns’ heroics are honoured at Oulton Park with his Safari Rally winning Subaru Impreza from 2000 joining the showcase from the Prodrive Heritage Centre.

2011 Mini John Cooper Works WRC
It was no surprise when new owners BMW tried to recreate the original Mini’s glory days with a return to top-level rallying at the start of this decade. One of its best results came when Kris Meeke finished fourth on 67th Rally GB in 2011 – the sister car of Dani Sordo is the most modern exhibit on the glittering Autocar 75th Rally GB display at Oulton Park.