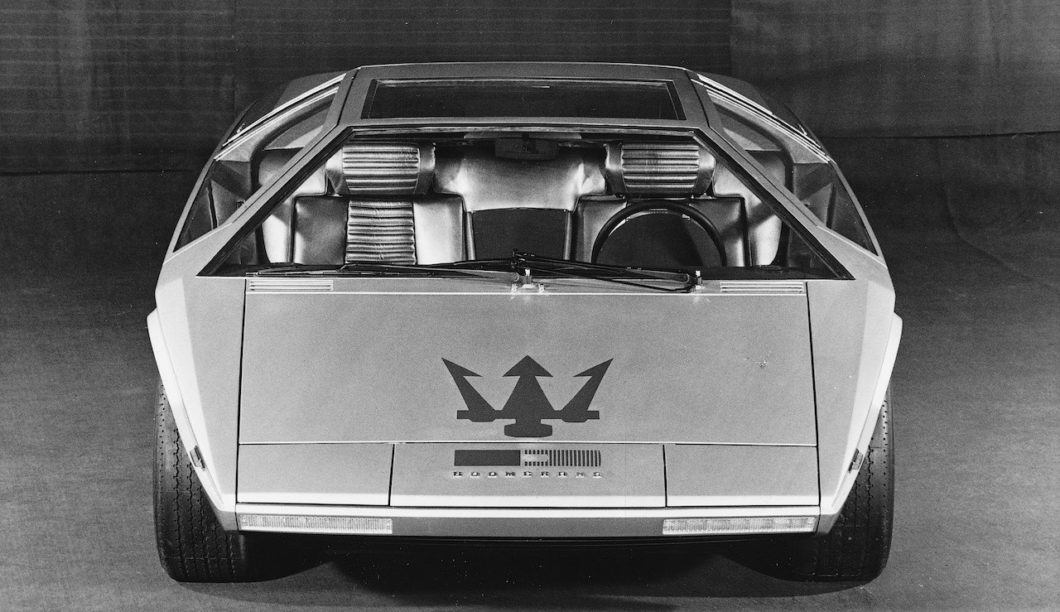 The ground breaking Maserati Boomerang, one of the finest wedge car designs ever created, is 50 years old this year. The futuristic concept car was the creation of Giorgetto Giugiaro and was produced by Italdesign. It made its debut on the 9th March at the 1972 Geneva Motor Show.

A mockup of the concept car first made a fleeting appearance at the 1971 Turin Motor Show, with the final, fully working one off concept car presented at the Swiss show in 1972. It was the only example ever made by Maserati.

Italdesign based the Boomerang’s chassis and mechanicals on the Maserati Bora coupe, using a rear mounted 4.7 litre V8 engine, which sent power to the rear wheels via a 5 speed manual gearbox. It produced 310 hp, bringing it close to a top speed of almost 300 km/h.

The two-seater sports coupé never went into production, but instead it left behind a stylistic legacy that continued to live on not only in Giugiaro’s later creations, but also in other projects, serving as inspiration for various other automakers in Europe and the United States.

The originality of the Boomerang from an aesthetic point of view was demonstrated in its iconic wedge shape and in its bold, clear lines, which conveyed a sharp sports car image, one that exuded power and speed.

The model was designed along a horizontal line that divided the car in two, with a sloping windscreen and a panoramic sunroof. The original windows, especially on the two doors, were interspersed with a strip of metal. The retractable square headlamps stood out in the front, alongside the horizontal lights in the rear.

It was extremely modern on the outside, but also on the inside as well. The interior design was as futuristic as it comes, with the dashboard instruments built into the spokeless steering wheel, with the binnacle remaining stationary as the wheel turns. The seats were also positioned very low in the car, enhancing the sports car feel.

The only example of the Boomerang ever produced has made numerous appearances at international competitions and Concours show, such as the Monte Carlo Concours d’Élégance in 2013, where it won “Best of Show”. It has changed hands numerous times since it was created by Maserati, moving through numerous private collections. It recently sold for over €3.3m in 2015. It has also been used in numerous commercials, appearing in particular in a series of Louis Vuitton press and television advertisements. Such is the lasting appeal of the Boomerang style icon.

Now half a century later, the Maserati Boomerang is still considered by many to be a genuine work of art. A revolutionary automotive creation that managed to influence the designs of successive cars. It continued the tradition of Maserati as a brand capable of creating unique automotive concepts, iconic and avant-garde cars that acted as pioneers of both technology and style.

Now more than ever, Maserati is unique for its design and innovative by nature, with the Maserati MC20 super sports car, the new Grecale SUV and the Nettuno engine, a patented synonym for technological revolution.