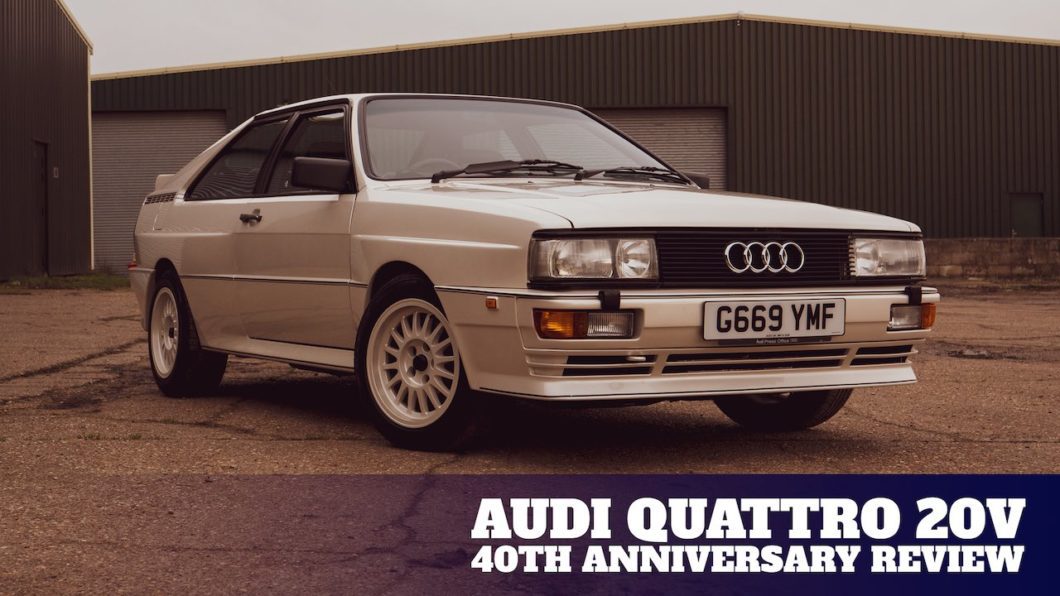 The Audi quattro, which celebrated its 40th birthday this year, is one of the all time great sports coupes. It ushered in a new era for the motor car, successfully bringing 4×4 technology to the masses. It wasn’t the first to do so, but the legacy is clear to see today, with virtually every Audi on the roads sporting the latest iteration of “quattro”. But what is it like to drive the legend, the original Audi quattro? And 40 years on from its debut at the 1980 Geneva Motorshow has it still got it?

Back in 2016 I got my very first taste of driving an Audi quattro. As a VW guy I’ve always had a keen interest in classic Audi’s, so naturally the UR quattro (as it is called in Germany) has always been on the radar. My first drive behind the wheel lasted about 45 minutes, enough to experience what the hype was all about. But it was also a frustratingly short. It wasn’t enough to really get to know the car and I walked away wanting more.

Then in 2018 I was very lucky to get a passenger ride in an Audi quattro Group 4 rally car. It was absolutely mental and demonstrated what a complete machine the quattro was in full on rally spec. Stepping out after those laps round the Curborough Sprint Course left me in complete awe. What an absolute beast of a car it was. Walking away I simply knew I had to drive one again.

Fast forward to today and with 2020 gradually drawing to a close, I was determined to mark the quattro’s 40th anniversary before the year was out. A inquiry to the Audi UK Press Office was soon rewarded with what can be described as the best early Christmas present ever… a stunning 1990 Audi quattro in Pearl White Metallic. It looked fantastic!

As it emerged from the delivery truck, I rubbed my hands with glee. Just the sound of the 2.2 litre engine firing up is an auditory experience in itself. The whir of the electric ignition and the sound of the fuel injection coupled with the legendary 5 cylinder, even at idle, is a delight. I had the Audi quattro all to myself for a whole three days. Christmas had indeed come early!

The Audi quattro is not a pretty car. That might sound like a strange statement to make, but it is not a criticism so bear with me. When I say it’s not pretty, I mean it’s not a graceful beauty with flowing curves, in the traditional 2+2 coupe sense. It is deliberately angular. It exudes a brutish quality which is exaggerated by the flared arches and the boxy profile. It is these very qualities that make it so alluring. Stood still the quattro means business and it is the combined package that makes this car so attractive. It was the engineering marvel for its generation, which is where its true beauty really resides.

Specification wise the luxury 2+2 coupe stacks up well even by todays standards. When new this 1990 Audi quattro 20V came with central locking, electric windows and mirrors, trip computer, digital dash, heated front seats with Jacquard satin fabric, heat insulated tinted glass and ABS as standard. Only the Blaupunkt Toronto Radio Cassette gives its age away. This particular car was also ordered with the optional full leather upholstery and Pearl White Metallic paint. All for £37,498.32 including options. This was no cheap sports coupe!

As soon as the delivery truck was gone I jumped in the quattro and hit the road. As a sports coupe, the appeal of the quattro is obviously with the turbocharger and the groundbreaking 4×4. However a significant portion of the Germanic coupes thrill factor happens long before engaging that fabled turbo boost. Just going through the gears from 1st to 3rd is a joy in itself, thanks to the evocative warble of the Audi five cylinder engine. It is a sound that gives you goosebumps, the excitement and anticipation of a receiving a tasty appetiser, before the arrival of the mouthwatering main course… which is of course the turbo.

When I first experienced the quattro back in 2016, I was blown away by how well it drove. The Audi UK press quattro reaffirmed that impression. You see you have to remember this car is thirty years old. But with the way it gets itself down the road, it just shrugs off that apparent age with complete ease.

Powering through the bends of my local B roads and onwards to the A roads, the quattro feels perfectly planted. The steering is a touch on the heavy side by today’s standards and the brakes, despite having ABS, could do with being a bit sharper. However the instantaneous feedback at the wheel is right there, so much so that I actually found myself laughing as the sports coupe hauled itself around a fast sweeping bend. The traction is so good you can feel the 4×4 system doing its job as it grips on the tight corners. It is so satisfying when it does that… hence the laughter… one of pure enjoyment. It is old school analog driving at its very best.

Working through the gears, the five speed gearbox has that satisfying notchy feel to it. It has quite a long throw, so the gear changes themselves aren’t the fastest, but the ratios perfectly match the torque of the 2.2 litre engine. As the revs climb and it’s hits the sweet spot between 2,000 – 3,000 RPM, the turbo comes to life, surging the quattro forward at a very rapid rate. The acceleration pushes you right back into the bucket seat as the wall of torque combines beautifully with the forced induction of the turbo. This is one very fast car and the traction from the quattro system delivers all that power to the tarmac. It certainly feels it has more than its stated 220BHP and it pulls like a rocket through the rev range. Before you know it the national speed limit has been reached, at which point you wish you could point it to the nearest race track, or gravel stage.

It’s at this point I realised I had to pinch myself to remind that this car is thirty years old. Yes the interior creaks and squeaks, as you’d expect for a car of this age. But all of that is immaterial thanks to the symphony playing up front. The swoosh sounds of the turbo when it is on song is grin inducing. It provides a suitably satisfying layer to an already impressive soundtrack and the seemingly endless supply of torque. Coupled with that is the subtle hiss of the dump vale when you come off the throttle. This isn’t to be mistaken for your typical rubbish sounding aftermarket dump valve. Far from it! Instead you are treated to a wonderful combination of mechanical sounds, a fine tuned German orchestra that keeps both you and the car on boost. And what a delightful tune it plays!

After three days and just shy of 100 miles (I would have driven more but being stuck in Tier 3 hampered my adventures), I had grown very used to having the Audi quattro on my drive way. It really is one of those must own cars, an evocative slice of that fantastic rally heritage. And I have to say, I actually preferred it in its Pearl White Metallic paint… it makes a welcome change from the more popular Mars Red and it suits the boxy shape really well.

Forty years on from the original cars debut, this thirty year old Audi quattro 20V has still got it. It helped kick start the decade of the Vorsprung durch Technik design philosophy. Its string of successes on the rally stages in the 1980s only helped to cement its iconic status. It is those accolades combined with the quattro’s pure driving experience that make you feel a bit like Stig Blomqvist and Björn Cederberg behind the wheel. It is something just a little bit special. So has the Audi quattro still got it? It most certainly has… and then some!

With the way 2020 has gone, getting to drive the original Audi quattro and round off its anniversary year has been a wonderful tonic for the soul. Thank you Audi UK and here’s to the quattro’s 50th in 2030!