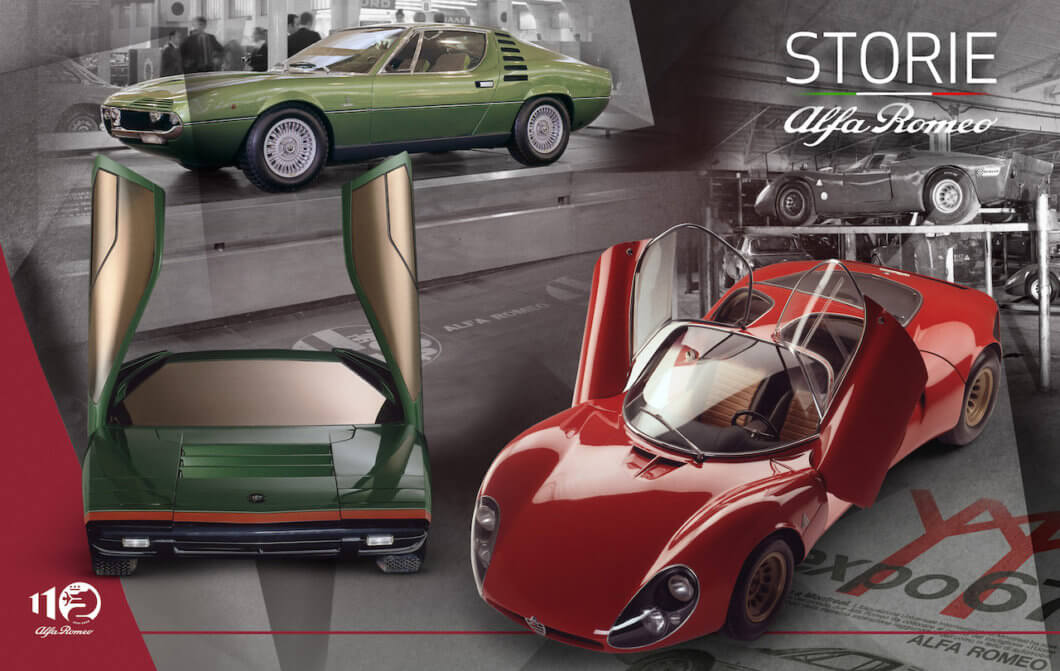 The Alfa Romeo 33 Stradale and the Alfa Romeo Carabo could not be more different. One all nerves and sinews, like an athlete portrayed in the midst of competition; the other, all straight lines and angles, aimed at grasping the essence of mobility and pushing it forward into the future. So much more than two interpretations, these are two different worlds.

The shared technical basis of these two cars is the synthesis of 50 years of racing experience at Alfa Romeo. Ingenious and rigorous planning, expertise and courage in the selection of materials, a style that marries technological innovation and creativity: these are the ingredients of the Tipo 33’s design.

The desire to compete

All this stems from the desire to compete, one that has never waned. In 1964, Giuseppe Luraghi – the then president of Alfa Romeo – felt it was time for an official return. To recreate the racing team, he acquired Autodelta, an Udine company that was already a privileged partner in the production of the TZ. Along with Autodelta, Carlo Chiti – who worked at Portello from 1952 to 1957 – also returned to Alfa Romeo, taking on the role of head of the official team.

In the same year, the 33 project began. Luraghi asked his team for a car that could compete in the “classes of the moment” for public success and media attention: the World Sportscar Championship and the time trials.

In the mid-1960s, Autodelta relocated to Settimo Milanese – closer to the Alfa Romeo plant, but most of all to the Balocco test track.

The first Tipo 33 frame designed by Alfa Romeo came to the Autodelta workshops in 1965. It has an asymmetrical “H” tubular structure, made of aluminium alloy, with internal integral fuel tanks. In the front panel, a magnesium structure provides optimum support for the front suspension, radiators, steering and pedals.

The engine and gear unit is mounted longitudinally in a central rear position. The bodywork is made of fiberglass, to limit the total mass of the car to 600kg – the minimum regulatory weight. Once again, lightness is Alfa Romeo’s secret weapon.

Victory in the 1975 and 1977 World Championship for Makes

Short development timescales were unrealistic for such an ambitious (and innovative) project. Almost two years would pass before the 33 was ready to race. For the first tests, the car adopted the TZ2’s 1,570cm³ 4-cylinder engine. In the meantime, a completely new engine was developed with an 8-cylinder “V” configuration, 2.0-litre capacity and output of 230hp at its debut.

The first 33 to race was immediately nicknamed “Periscopica”, for the air intake that pops out above the roll bar. The time trial at Fléron, near Liège, was chosen for its debut. The driver was the chief tester at Autodelta, Teodoro Zeccoli. After years of meticulous preparation, the 33 entered the world of competitive motorsport on March 12, 1967. Its victories began immediately, including in the 1975 and 1977 World Championship for Makes, which made the 33 a world leader.

The Florentine aristocrat who wanted to be a designer

When Alfa Romeo decided to produce the 33 in very small numbers for private individuals, it needed a new look to bring its sporty character to the roads. The project was entrusted to Franco Scaglione.

Born in Florence into an ancient aristocratic family, Scaglione studied aeronautical engineering until he was conscripted into the army. He then set off for the Libyan front and was taken prisoner in Tobruk. He returned to Italy in late 1946. Determined not to resume his studies, he chose to become a car designer: first with Pinin Farina, then with Bertone, and later working freelance.

Scaglione put all his technical expertise and creative daring into the design of the 33 Stradale, resulting in a masterpiece where innovation in style blends with the quest for aerodynamics and functionality.

The bonnet of the 33 Stradale opens fully to improve access to the mechanical components. For the first time on a street-legal car, its “elytra” doors make it easier to get into a vehicle that rises less than one meter off the ground. The only differences from the track version are the extension of the wheelbase by 10cm and a steel frame, rather than an aluminium one.

The engine is the same as in the Tipo 33, made entirely of aluminium and magnesium alloys, with indirect mechanical injection and dry-sump lubrication. Distribution is taken care of by a double overhead camshaft, with two valves and two spark plugs per cylinder. In such a lightweight car, its 230hp meant it could reach a maximum speed of 161.5mph, with a zero to 62mph time of 5.5 seconds.

The premiere event in Monza

The car was officially launched at the 1967 Turin Motor Show, but had been unveiled a few weeks earlier to an enthusiastic audience of experts. On September 10, 1967, the Italian Grand Prix – the ninth round of the Formula One World Drivers’ Championship – was held in Monza. That GP went down in history for Jim Clark’s epic comeback against Jack Brabham – and for the debut of one of the most beautiful sports cars ever.

At launch, the 33 Stradale was the most expensive sports car on the market, then selling for almost 10 million Italian lire, compared to 6-7 million for its most prestigious rivals. Only 12 models were produced with Scaglione bodywork. Its buyers were making the investment of their lives as they are virtually priceless today.

The 33 Stradale represents the pinnacle of the concept of an “anthropomorphic car”, but the quest for style has also taken Alfa Romeo in other directions. The idea of a “car of the future”, inspired by a spaceship, was manifested in the 1950s by the “Disco Volante” (“Flying Saucer”), Designed by Touring, the spider was the fruition of advanced aerodynamic research, with its side-rounded fenders attached to the low, sleek body of the car.

A “dream car” was presented at the 1968 Paris Motor Show, representing the evolution of this radical idea: the Carabo, designed for Bertone by Marcello Gandini, then only 30 years old.

A non-identical twin: the Carabo

The Carabo was based on the mechanics of the 33 Stradale, used at the time by other designers for one-offs such as Giorgetto Giugiaro’s Iguana, the 33 Special Coupé, Pininfarina’s Cuneo, and Bertone’s Navajo.

The height was the same, but the rounded lines had disappeared completely. Everything in the Carabo is clear-cut, from the wedge design to its “scissor” doors.

The name Carabo was inspired by the Carabus auratus, a brightly metallic-coloured beetle. The same hues are used for the car’s body: luminescent green with orange details.

From then on, Alfa Romeo began to pay particular attention to the extravagant colours and special paintwork techniques, to highlight the brand’s uniqueness even more. That same chromatic exploration continues with the Montreal.

In 1967, nations from around the world took their best technical and scientific achievements to the International and Universal Exposition in Montreal. Alfa Romeo was asked to create a technological symbol for the Expo – a model to represent “the highest aspiration of modern man in terms of cars”. Satta Puliga and Busso requested assistance from Bertone, which tasked Gandini with designing the bodywork and interiors. The result was a resounding success. North American visitors greatly appreciated the elegance and content of the car.

In the wake of public consensus, a standard version was developed, which was presented at the Geneva Motor Show in 1970. Unlike the original concept, this Montreal has a V8 engine based on the Tipo 33, raised to 2.6-litre capacity and limited to 200hp. The model impresses with its extraordinary range of colours, both pastel and metallic: from green (previously used in the show car for the Expo) to silver, and from orange to gold.

Chromatic exploration is an Alfa Romeo tradition which continues today, in the new palette of bodywork colours on offer: Red Villa d’Este, Ocher GT Junior and Montreal Green. These hues are inspired by the 110-year history of the brand, and are dedicated to some of its most glorious models.