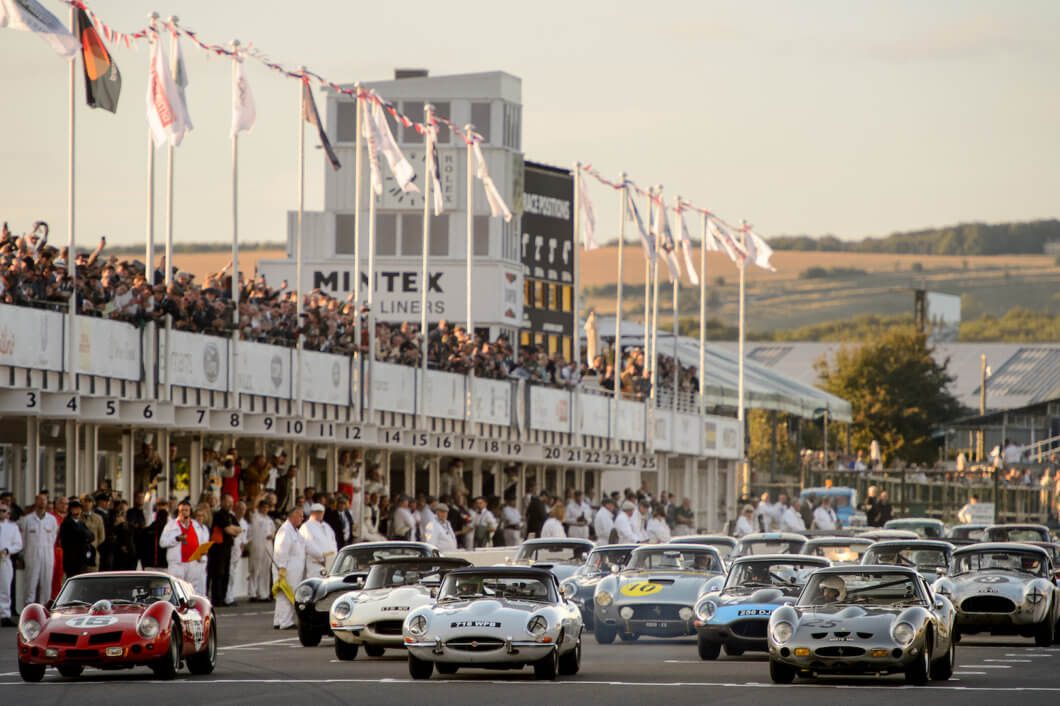 As the curtain fell on the 2018 Goodwood Revival Meeting, the gentle hum, resounding from the blend of roaring engines, brass bands and laughter from the crowds, gradually dissipated and a hush descended on the 20th anniversary celebrations at the hallowed Goodwood Motor Circuit.

Every year, the Revival continues to grow in stature, with historic automobiles and glamorous spectators in period dress making the journey to the world’s most revered heritage motor sport gathering. Rolex has supported classic car events for over two decades, closely identifying with the style and beauty on show, while appreciating the history of the sport. The Swiss watch brand first partnered with this exemplary event in 2004, when Rolex became the Title Sponsor of the Drivers’ Club.

Racing commenced on Friday evening with the much anticipated Kinrara Trophy and it was only fitting that as the 2018 Goodwood Revival marked its 20-year milestone, the contest was one of the most valuable motor sport races ever held. A field of pre-1963 closed-cockpit GT cars from legendary manufacturers competed in an electrifying exhibition of wheel-to-wheel motor racing over the course of an hour.

As the sun set, it was the No.16 1961 Ferrari 250 GT SWB, fondly known as the ‘Breadvan’, driven by Niklas Halusa and five-time 24 Hours of Le Mans winner, Emanuele Pirro, that took the chequered flag. Such demonstrations of passion behind the wheel, in front of packed grandstands, are testament to an enduring appreciation for the past which unites Rolex and the Revival.

This year, Rolex Testimonee and three-time FIA Formula 1® Drivers’ World Champion Sir Jackie Stewart drove the 1957 Cooper T43, the 1966 Eagle-Weslake T1G and the 1960 Ferrari 250 GT SWB/C in the Rob Walker and Dan Gurney tributes. Afterwards, he said: “It was an absolute privilege to have the opportunity to drive around this magical circuit once again, especially in memory of motoring legends.”

Reflecting on the event’s milestone, Sir Jackie continued: “Seeing Goodwood Revival celebrate its 20th anniversary has been particularly nostalgic; the Duke of Richmond has established an extraordinarily unique and successful event, honouring the heritage of our sport and the beautiful cars that time will never forget. As I mark my 50th year as part of the Rolex family, it is a pleasure to be here and enjoy the special environment of the Rolex Drivers’ Club – which feels like a second home to me.”

Over three days, the 2018 Goodwood Revival welcomed swathes of motoring enthusiasts, dressed head-to-toe in a myriad of vintage costumes from wartime 40s fashion, to the fabulous 50s and the swinging 60s. The 150,000-strong crowd gathered in the September sunshine, reveling in the unique atmosphere of Goodwood Revival and fondly remembering the golden age of Goodwood Motor Circuit.

Elegance and style were on display around the spectacular grounds of the Goodwood Estate, at the exquisite best dressed parades, as well as the prestigious Rolex Drivers’ Club. As visitors strolled through the Revival High Street, admired the Earl’s Court Motor Show and danced on Richmond Lawn they were truly transported to yesteryear.

Fifteen races were contested over this captivating weekend of motor sport as Goodwood turned back the clock with pre-1968 Formula 1, saloon, prototypes, sports and Formula Junior cars gracing the 3.809 km track and thrilling fans. A highlight of the weekend, the St Mary’s Trophy featured an all-star line-up, including André Lotterer, Jochen Mass and Mike Conway, while 30 pre-1954 motorcycles raced in the Barry Sheene Memorial Trophy.

Each morning, iconic British commercial vehicles from years gone by, including several 1950s Austin FX3 Taxis ‘the London black cab’, paraded around the track. Meanwhile, thundering warplanes took to the skies as part of the Freddie March Spirit of Aviation, which featured one of the most extensive gatherings of vintage Royal Air Force aircraft in honour of their centenary year.

As the 2018 Revival drew to a close, marking an end to Goodwood’s glorious summer of sport, the Duke of Richmond – addressing the audience from the Race Control Balcony – crowned the 2018 Goodwood Revival winners and announced the Rolex Driver of the Meeting. The specially-engraved Rolex Oyster Perpetual Datejust 41 was awarded to Darren Turner, following his display of impeccable driving in three races over the course of the weekend.

After accepting the accolade, Darren Turner said: “It is incredibly special to win a Rolex watch. I’ve raced at the Rolex 24 At Daytona and seen the winners there awarded a Rolex, as well as on the top step of the podium at Le Mans. For any driver to receive this honour at a race weekend is unforgettable. I love coming to Goodwood, it’s an amazing weekend and a privilege to be a part of, thank you to everyone involved.”

A Trip Down Memory Lane at the 2019 Goodwood Revival