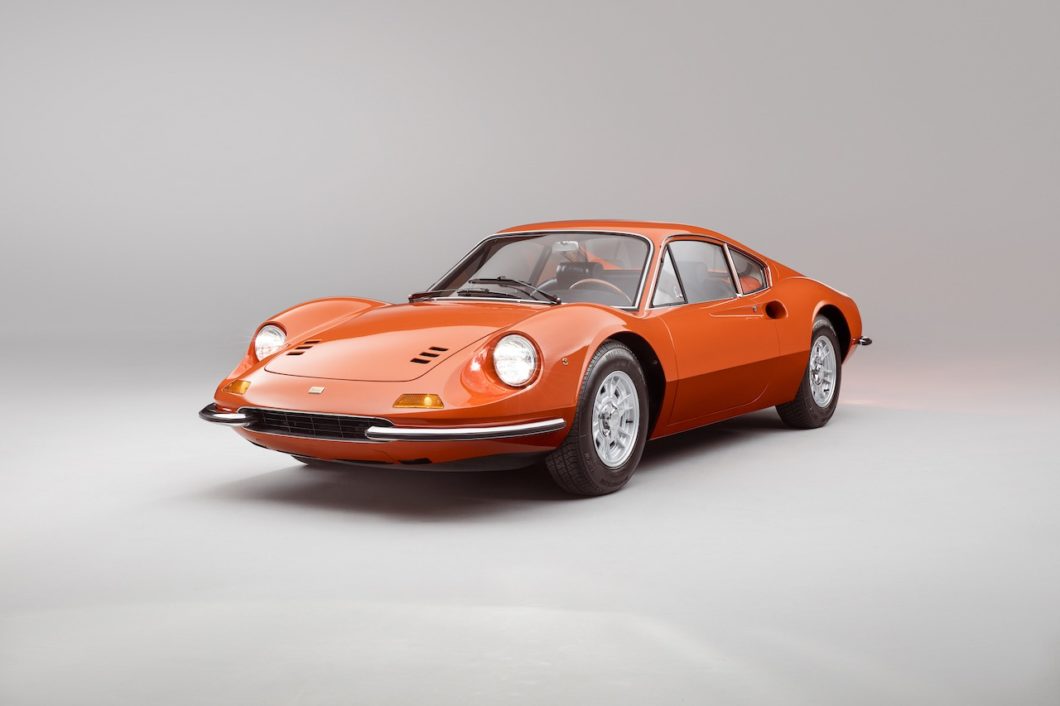 A rare Ferrari 246 GT Dino L Series that was displayed on the Ferrari stand at the 1969 Frankfurt Motor Show, has been restored to Concours condition by Bell Sport & Classic.

The 246 GT Dino L Series, chassis number 00436, was sold new in West Germany. It was the first Dino to be sold in the country and the 7th L Series ever made by Ferrari. The 246 GT L debuted in 1969 and featured a 60mm longer wheelbase and boasted a more powerful 2.4-litre engine. Just 357 examples of the L-series Dino were built by Ferrari.

Prior to arriving at Bell Sport & Classic in 2017, chassis number 00436 had been moved around the globe, spending time with owners in Germany, France, Canada, and the US. Despite the car’s far-flung travels, it had accrued only 53,400 miles (86,000km) over a period of forty-eight years. Despite its low miles the car was however in a very sorry state of disrepair.

“To be honest, I doubt if many other proper restoration companies would have even considered taking this project on. The tired state the Dino was in, it just didn’t look economically viable to attempt to return it to its former glory,” recalls project leader Peter Ensor, who along with Marc Holden, Elliot East and technical director Attilio Romano formed the key team responsible for the Dino’s restoration.

“The car had been restored twice before in its life already, but lacked real care and precision. It was painted Rosso Corsa red instead of the original Rosso Dino, which has a more ‘orangey’ hue, the leather trim was incorrect too – it was black and red as opposed to the black with orange seat towelling interior fitted at the factory. And that was just for starters. When we delved deeper, we realised that there were plenty of other problems to address too.”

Rust plagued the inner wings and the misshapen front and rear valances. The ‘scoops’ on the door panels did not align with those on the body, neither in terms of height nor angle, the wheel arch heights didn’t match from one side of the car to the other and the rear roofline was off-kilter. “And those were just the things we could see,” adds Elliot East wryly. “We also found that at some stage replacement front wing panels had been welded on top of the original items. The same ‘technique’ had been used on the sills and rocker panels, which meant the seam lines had been lost and rust had been locked in underneath.”

The restoration team also focused on a thorough mechanical overhaul of the Ferrari. The 2.4-litre V6 engine was stripped, along with the triple Weber 40 DCF carburettors, five-speed gearbox, all-round disc brake system, front and rear coil spring, and double-wishbone suspension. Each component was painstakingly restored to original specification and the engine was tested on a rolling road and fine-tuned to ensure it produced the precise 191bhp it left the factory with.

Using the specialist information supplied by Bartz, the Bell Sport & Classic team went to extraordinary levels of meticulous detail to ensure they restored the Dino to the highest possible specification. “For example, there is a panel seal that runs along the sill underneath the doors. On sub-standard Dino restorations, it’s all too easy for this to fill up with paint, so the detail gets lost,” explains Ensor. “That might only be a minor thing to some people, but little things like that are everything to us. Call it obsession if you like, but on our Dino, there is not a single spec of paint on the panel seal, and the detailing is perfect.”

Achieving symmetrical perfection required the wheel arches to be reformed and new sills to be fabricated and fitted. “Once we had the body panels perfect, we still had the issue of ensuring the scoops on the doors would align correctly with those on the body panels. That meant refabricating the doors and aluminium-welding the original scoops into the new skins,” reveals Ensor.

“It took two weeks before we were completely satisfied that the doors opened and closed correctly and that the scoops on the doors aligned absolutely perfectly with those on the rear body panels. We spent a similar amount of time fitting the curved rear screen. That’s a very tricky job because the screen is actually bigger than the space it is going into. The only way to fit it is to put one side in first and then flex the screen ever so slightly to get the other end in,” added Ensor.

The Dino 246 GT 00436 has been returned to its Rosso Dino paint finish, which involved first applying the period-correct grey primer followed by a Rosso Corsa undercoat with Rosso Dino final coat. This painstaking, multi-tone process ensures the rare and desirable Rosso Dino is shown most effectively.

The seats have been reupholstered in period-correct black leather complete with orange towelling inserts, and beautifully installed along with a newly built dashboard. Even the engine cam covers have been restored to their original bronze colour, ensuring the car is precisely as it left the factory in August 1969 – only better.

Tim Kearns, Managing Director of Bell Sport and Classic, said: “Like every project we undertake, bringing the Dino 246 GT back to be life has been a true labour of love and most definitely not a clock-watching exercise. No amount of time, expense or attention to detail has been spared in ensuring the car is now in even better condition than when it left the factory. Along with its concours condition, the car’s low mileage adds to its considerable allure.”

“With its mid-mounted V6 engine, the Dino differs from the Ferrari V12 GT models that preceded it. It represents a seminal point in the company’s history and stands as a fitting tribute to Alfredo ‘Dino’ Ferrari. There will always be an air of intrigue to this car too, as one cannot look at it without wondering what direction Ferrari may have taken if Alfredo had lived to take over the company’s reins from his father, Enzo. And that makes the Dino an exceptional car.”