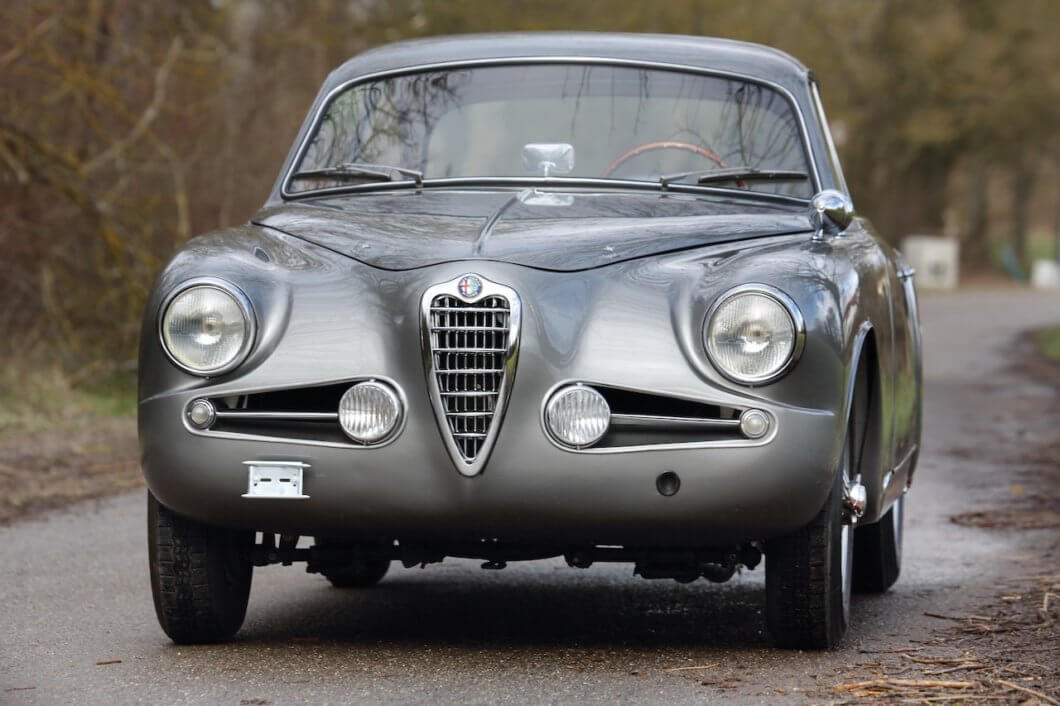 RM Sotheby’s are offering in its upcoming Petitjean Collection online sale (from 3rd – 11th June), a rare and very interesting 1955 Alfa Romeo 1900C Super Sprint Coupé which has been given a few performance tweaks. This might not be one for the Alfisti purist, but it emphasises the speed and beauty of the stunning 1900C 2+2 by Touring.

When it was launched in 1951, the 1900C Sprint cabriolet was styled by Pinin Farina, with Touring taking responsibility for the Coupé. At launch, both models were fitted with the 100BHP 1900TI sports saloon engine, which gave them sports car performance. By 1954 Alfa Romeo had enlarged the engine to to 1,975cc, which increased power to 115bhp.

Thanks to the the light weight aluminium alloy body, the 1900C SS could could reach speeds of 118mph, which was very impressive for 1954. Thanks to the light weight, short chassis design and with the potent twin cam engine, the 1900C Sprint was very successful on the competition circuit. A total of 854 Super Sprints had been made by the time production ceased. Zagato were also responsible for a handful of 1900C SS Coupés.

The Alfa Romeo 1900C Super Sprint Coupé coming up in RM Sotheby’s sale was built in 1955 and is said to have been restored by noted Alfa Romeo specialist Paolo Stallone of Bad Krozingen in Germany. The goal of the restoration was to upgrade the 1900C SS to fast road touring spec. This was achieved by swapping the original cylinder head for one from an Alfa Romeo Spider 2000, to which were added a pair of Weber side-draft carburetors.

As mentioned earlier, this might upset a few of the purists out there but given that the concept of the SS was to create the ultimate sporting 2+2 Alfa, the conversion is very much in the spirit of the Super Sprint Coupé. Plus the head would have originally been used on a 1950s Alfa Romeo 2000 Spider, so at least it is a period piece.

No performance figures are given for the upgrade but given that the original factory configuration was around 115BHP, it is possible that power has been increased to around 130BHP. Though it could well be more than this as figures of 130BHP have been quoted for 1975CC twin cam and twin Solex carb spec Alfa’s of the period. Obviously any prospective buyer would want to invest in a rolling road test to discover what the true figures are. And in case they wish to revert to the factory specification, the original cylinder head is included. The listing doesn’t mention if the original factory twin Solex carbs are with the car. Also included are the bumpers, which were removed to save some additional weight.

Ignoring the performance upgrades for a moment, lets talk about the rest of the car. For starters the Alfa Romeo 1900C Super Sprint Coupé is one of the most beautiful Alfa’s ever designed. It combines the finest coachwork by Touring which created what is in essence, the perfect 2+2 Italian sport Gran Turismo. The SS Coupé is simply breathtaking in the flesh, the soft aerodynamic curves dressing the light weight chassis. The styling is simple but elegant and it inspired many subsequent Alfa aerodynamic designs.

This particular 1955 Alfa Romeo 1900C Super Sprint Coupé carries an estimate of between € 220,000 – € 300,000, which reflects both the rarity and the demand for this elegant Italian GT. With its 2+2 configuration, it makes for a practical classic that has the pace to keep up with modern traffic and will look stunning while doing so. Plus it has the added prestige of being eligible for such historic motor events as the Mille Miglia. For those with the budget this is as good as it gets from Alfa Romeo.

More details on this 1955 Alfa Romeo 1900C Super Sprint Coupé and the Petitjean Collection sale can be found on the RM Sotheby’s website.

Alfa Romeo – The first Constructor to win the F1 Championship