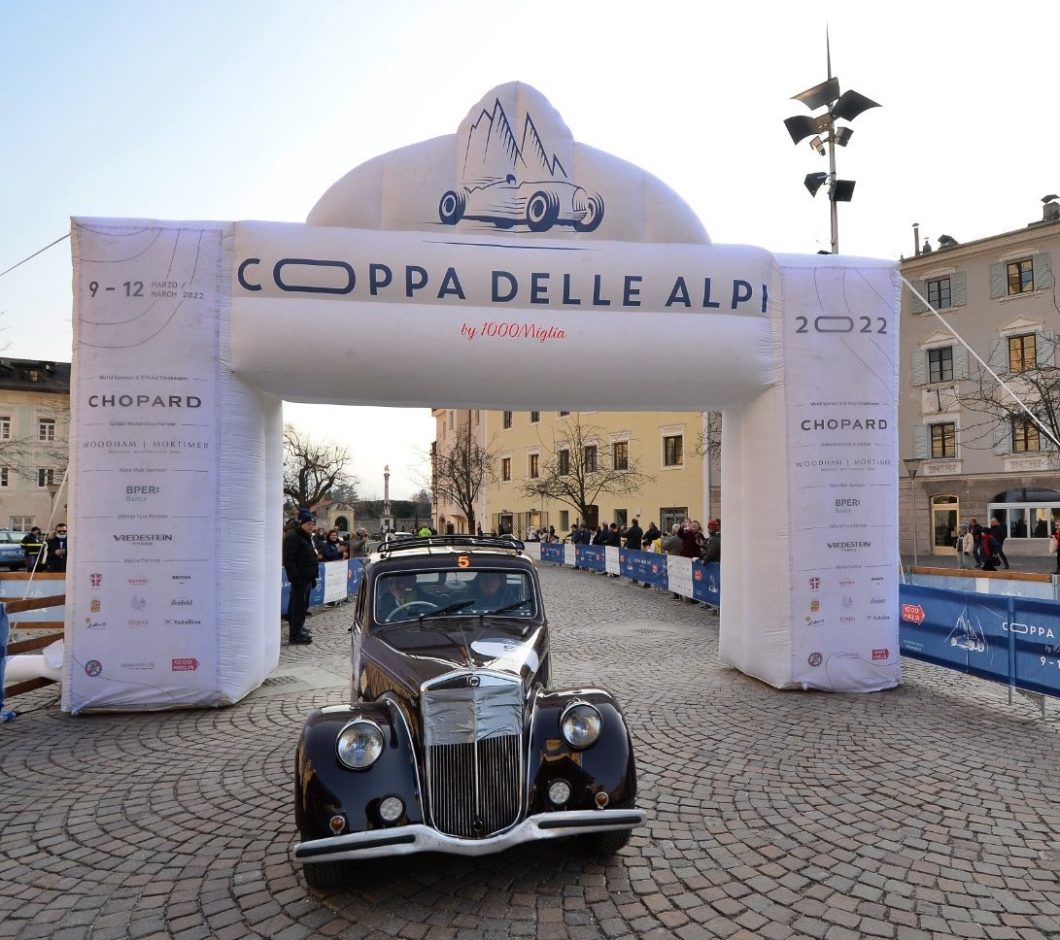 The Coppa delle Alpi 2022 has been won by Gianmario Fontanella and Anna Maria Covelli in a 1939 Lancia Aprilia. The four day event organised by 1000 Miglia Srl, saw thirteen nations compete in an amazing selection of classic and vintage cars.

The winter regularity race with an international flavor, saw the fifty six entered cars and their crews cross the Alps of Italy, Switzerland and Austria, along a route of over 1000 km and over fourteen Alpine passes.

This years event was the first race valid for the 2022 Italian Great Events Championship organized by ACI Sport. The Coppa delle Alpi which is run by 1000 Miglia required the crews to be able to run 70 Time Trials and 65 Average Trials. Special attention was given to the trials on numerous snowy surface runs, in particular in the Montebello Quarry, the uphill climb on the Marmolada, and on the Bernina and Valparola passes.

There were five special Trophies award for the winners 0f the Time Trials. These included the Bper Trophy, the Bormio, the St. Moritz, the Seefeld and the Bressanone Trophies. The first absolute classified, those of the general classification of the Average Trials and the winners of the five Groupings received guaranteed acceptance in the 1000 Miglia 2023.

After 4 days of and 1000kms that took in some of the finest scentry in Europe, the winners were Gianmario Fontanella and Anna Maria Covelli who piloted their 1939 Lancia Aprilia, Car No 5 to victory.

In second place were Roberto Crugnola and Francesco Moroni in their 1937 Fiat 508C and coming home in third place were Francesco Di Pietra and Giuseppe Di Pietra, who drove a 1938 Fiat 508C.

It was therefore an all Italian podium, both crews and cars at this years Coppa delle Alpi, who triumphed ahead of the 35 international crews that took part over the four days.

Commenting on the successful staging of this years Coppa delle Alpi, the President of AC Brescia Cav. Aldo Bonomi said: “Two years after the first edition in 2019, finding ourselves on the roads of Europe’s most beautiful mountains with these cars that have made history is for us an important sign of starting up again and a support for these territories.”

Alberto Piantoni, CEO of 1000 Miglia added: “A particularly heartfelt thanks to all the participants, the Partners, the local administrations, the Italian and inter- national police forces that escorted us along the entire route.”

“Also a heartfelt thanks to the 1000 Miglia Team and to all the volunteers who made this event possible.”

Summing up the Coppa delle Alpi 2022, Chairman of 1000 Miglia Beatrice Saottini added: “My first race as Chairman of 1000 Miglia has given me unexpected emotions. I have always taken part in these races as a participant and I hope that this sensitivity of mine can be of help so that our events and races can be an unforgettable experience.

All eyes now turn to the 1000 Miglia 2022, which takes place from 15th – 18th June. This year the re-enactment of the worlds most famous historic road race will celebrate its 40th addition and the 10th orgnaised by 1000 Miglia Srl.