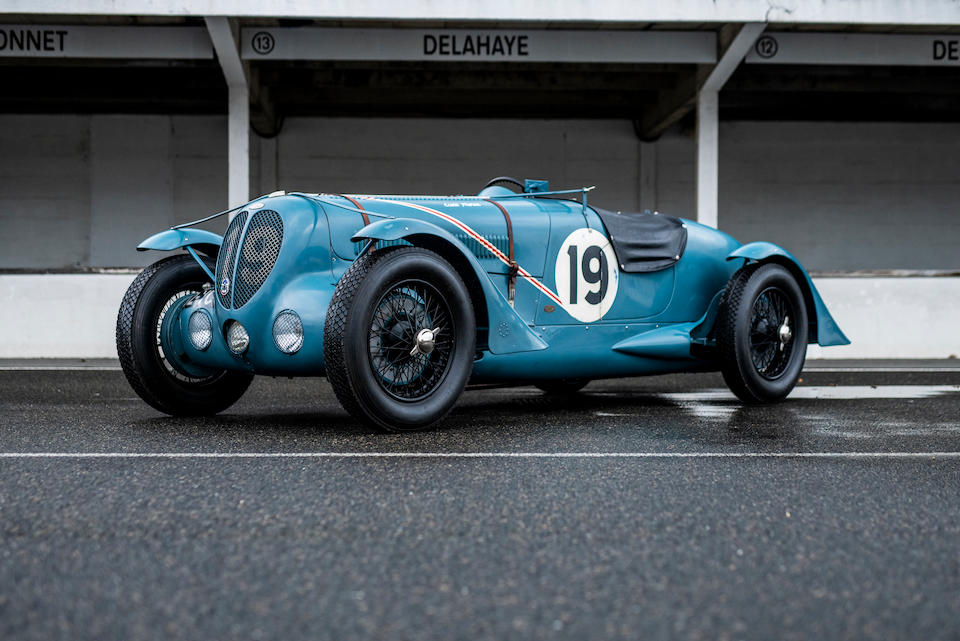 A superb 1936 Delahaye 135 S Competition with documented race history, including action at the 1939 Le Mans 24 Hours, is being offered at Bonhams sale ‘Les Grandes Marques à Monaco’, on the 23 Apr 2021.

The racing scene in the lead up to the Second World War was very much by led by French marques such as Delahaye. They were at the forefront of motorsport and the Paris based firms race cars came to define an era of engineering brilliance and also style and elegance. It was the aerodynamic styling of Delahaye’s car design that came to signify the wonderful Art Deco automotive era. Their cars may have been built to win, but they also looked sublime whilst doing so.

Designed by the young Delahaye engineer Jean Francois under the direction of technical director Amédée Varlet, the Type 135 utilised one of the most capable straight six engines of its era. Fitted with triple Solex carburettors, it produced an impressive 160BHP, which when coupled with the strong chassis and lightweight, streamlined coachwork, created a very competitive racing package that made rivals Bugatti take note.

Such was the ability of Delahaye’s new Type 135 racer, it set the time record at the Ulster Tourist Trophy and also took 2nd and 3rd place in the 1936 Mille Miglia. A 135 Competition would also go on to win the Monte Carlo rally in 1937 and the 24 Hours of Me Mans in 1938.

This particular 1936 Delahaye 135 S Competition was created to meet the regulations for the 1936 Le Mans 24 Hours, which did not take place due to labour unrest in France. Instead it saw action that year with leading French driver René Carrière at the Grand Prix de Comminges on the 9th August, where it retired. Later that year, on the 20th September, it finished in 1st place at the Côte Mont-Ventoux. It also finished 8th at the Donington Grand Prix on the 3rd October.

It was given the nickname Blue Buzz II, which it earned alongside its fellow Type 135 S racers, which were known as Blue Buzz I and Blue Buzz III, as all three cars were originally entered by the L’Ecurie Bleu team in 1936. The nicknames came about thanks to the distinctive blue colour of the teams cars, but also allegedly because of the muffled buzz sound of the engine.

The middle of the three French racer cars, chassis 46810, continued in competition until the middle of 1937, when it was withdrawn from racing for reasons unknown and it did not see action again until the start of the 1939 season. It was then acquired by driver Eugène Chaboud, who drove it to victory at the Paris-Nice Rally. It’s racing career came to an end just before the outbreak of the Second World War.

After the war its then owner Fernand Grivillet decided to re-body the French race car in 1952 with a German coachbuilt coupe body. Despite the loss of the original body, Grivillet clearly loved the retired race car as he kept it for 30 years. It then passed through numerous owners hands before finally being restored by a recent owner to its original L’Ecurie Bleu coachwork. Carrosserie Bonnefoy restored chassis 46810’s streamlined aluminium body after carefully studying photographs of the car in period.

Amazingly chassis 46810 still retains its original matching numbers straight six engine and Cotal pre-select gearbox, which is a remarkable feat for a race car of this vintage. Now restored to its original appearance, it is ready to once again take part in historic race events and concours shows.

The great Delahaye name vanished by 1956, but the legacy left behind by its wonderful race cars is truly remarkable. The beautiful 1936 Delahaye 135 S Competition being offered my Bonhams played a role in that fantastic racing history, making it a tantalizing acquisition for the discerning collector. Chassis 46810 carries an auction estimate of between £ 690,000 – 950,000. More details can be found on the Bonhams website.