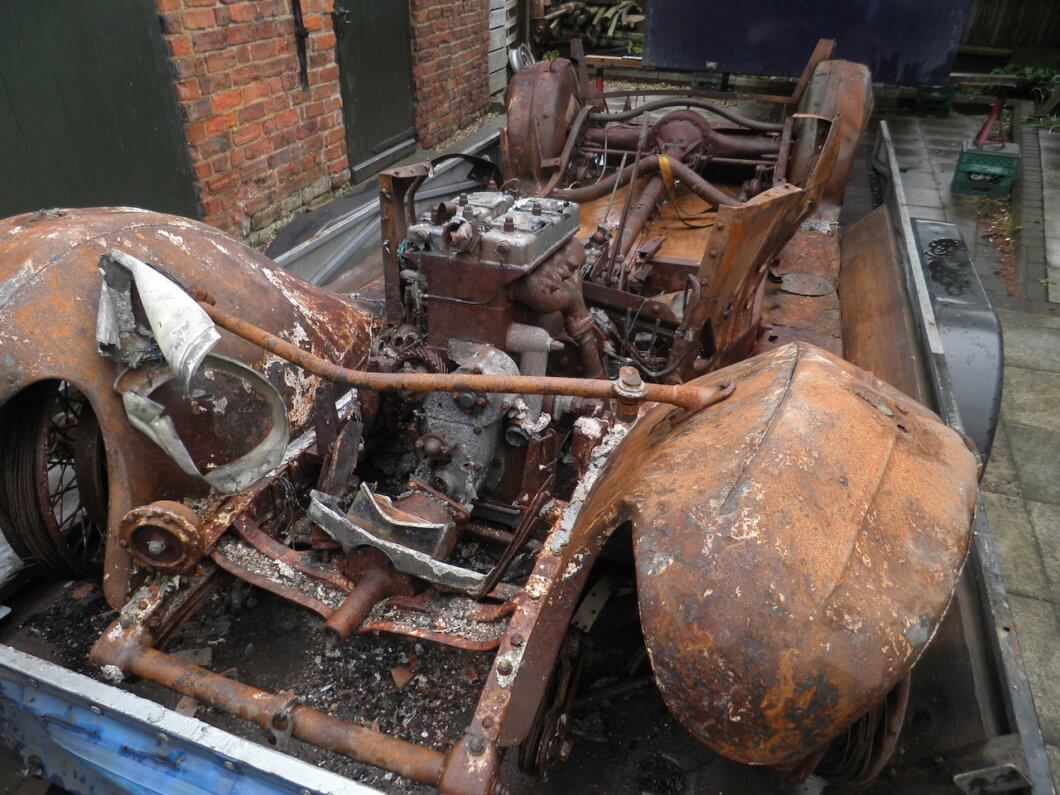 Restoring a classic car is a dream that many petrolheads aspire to. Some will freely admit owning and restoring a classic is akin to an incurable disease, bordering on obsession. “Too many projects” is a sentence one often hears, as the desire to “fix em all up” takes hold. While it is easy to judge a book by it’s cover (no pun intended), the rescue and restoration of any old car is more than just obsession, it is the saving of a piece of automotive history from the grips of oblivion. In this book review Take to the Road takes a look at the inspiring story of Phoenix, the remarkable restoration of a fire destroyed 1934 Riley Lynx by self confessed petrolhead Roger Fountain.

Roger Fountain’s story goes back to when he acquired his first set of wheels, a worn out Morris 8 van that had done countless miles on the milk run. One day whilst out on the road enjoying his new found freedom, he stumbled on a field full of old cars. Like any budding and curious petrolhead, he got out to have a look at the wrecks. As he wandered round the hulks slowly being reclaimed by nature, he spotted several old Riley’s and was struck by their neat and exotic looking engines, which were in stark contrast to his rather tired side valve Morris engine. While it would many decades before he could embark on his Riley journey, the seed to create his very own Riley Special was sown.

Indeed Roger’s automotive tastes were very much in the post war era and he raced for a time a 1960 Lotus Elite. However he always found himself drawn to the pre-war cars, always keeping an eye out for an interesting Riley. The dream you see was very much still alive, itching away whilst he kept busy with other car projects. Indeed there were two 1930’s Riley projects that came into his possession, each with the potential to become “that Riley Special”. However time and circumstance had other plans, as Roger fell foul to the symptom and consequence of “too many projects”. Both Riley projects moved on to new owners, leaving Roger to ponder his Riley Special dream once again.

Fast forward to 2014 and Roger was very much keeping the dream alive, carrying out detailed research on prewar Riley’s and keeping an eye on the classifieds. It was then that a chance conversation with a member of the Riley Register lead him to what would become the basis of his dream project. Undeterred by the fact that this particular 1934 Riley Lynx had been in a disastrous fire on a farm, Roger was determined to investigate it. Everything is repairable… right?

One look at the photos of the destruction that awaited Roger and his wife Penny when they visited the farm that was the then final resting place of the Riley Lynx, would have made any other person simply walk away on the spot. One can say that some of us old car enthusiasts have a unique ability to see past the grime, rust and neglect and glimpse the polished gem at the end of the tunnel.

But when a car experiences a catastrophic fire in a hay shed where temperatures reached in excess of 600 degrees plus, the aftermath of said fire can only be described as shocking. Added to that the melted and twisted remains had been exposed to the elements for over ten months. Oh and the Riley had been officially written off by the DVLA. It legally could never be put back on the road.

So for the 99.9% that would have been the walk away moment, no car would be worth that much effort and torment. But for Roger his pragmatic and can do attitude could see past the destruction and recognised a chassis and various other components that had remarkably survived the extreme heat, the key components on which to build his dream Riley Special. At that moment the Phoenix saga was born!

Rather than go into the finer details of Roger’s five year restoration of the Phoenix and spoil the whole story, it is best to read it for yourself. The reason being simply that this story is a true inspiration, a triumph of sheer determination and perseverance over adversity. If you remember those moments when you struggled to fit a starter motor to your classic, or skinned your knuckles on some stubborn bolts, then you need to pause for a moment and reflect on the daunting challenge that Roger faced when he got the Riley Lynx home. Whilst considering that challenge and imaging the amount of sheer graft involved over five years, add both complicated back surgery and prostate cancer surgery to the picture. Plus a fight with the DVLA that threatened over £25,000 worth of work. That is exactly why Roger’s story is both remarkable and inspiring.

So if your own restoration project has stalled or has failed to get off the ground for whatever reason, I strongly recommend reading Phoenix. After all the stress and hardship he endured, Roger is to be commended for saving the Riley Lynx from the scrap heap. His story is a true inspiration and shows what can be achieved when you really put your mind to it. Classic Car Dreams do come true!

Phoenix is available to order from most bookshops in the United Kingdom, and is also globally available via UK-based Internet book retailers.