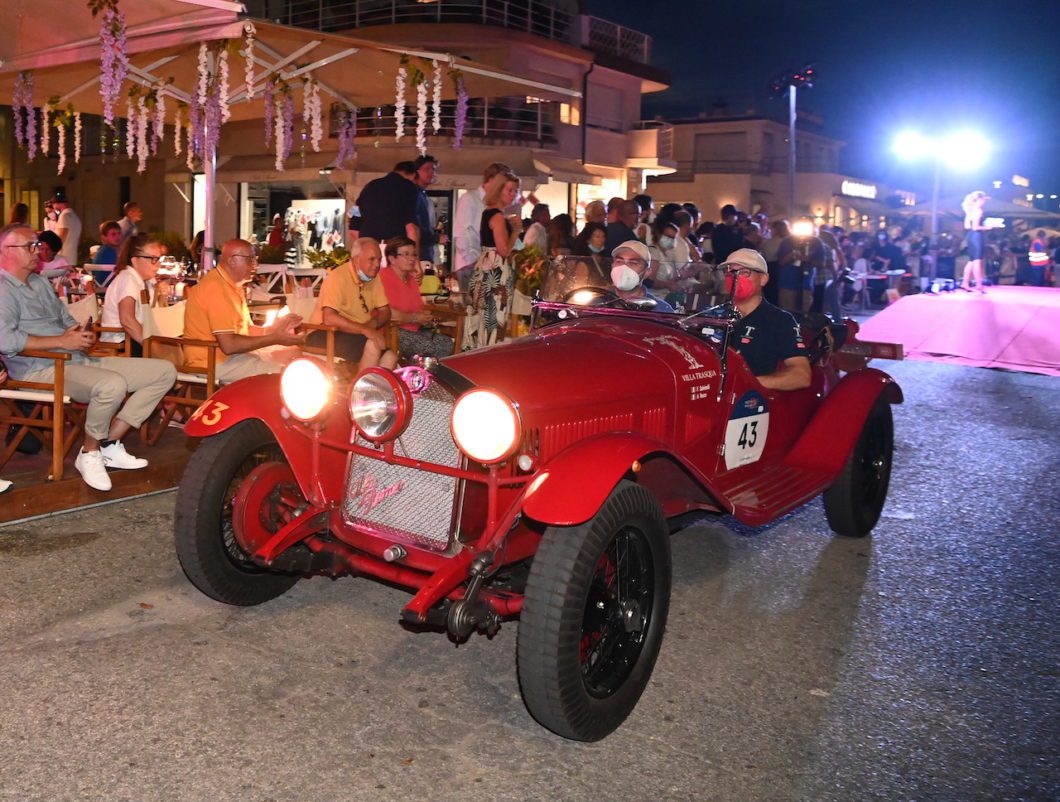 Racing with the number 43, the historic Alfa Romeo covered an impressive 1800 km in four days and 45 hours of driving, through some of the most beautiful cities and countryside in Italy.

Andrea Vesco already has three victories to his credit, all with the same car model, so he is no stranger to the challenges of the most beautiful road race in the world. After his first win with Andrea Guerini and then, last year, with his father Roberto, he completed the hat-trick of victories with his co-driver Fabio Salvinelli, also a regular Mille Miglia driver from Brescia.

“It’s always a great satisfaction to get on the highest step of the podium, especially here in Brescia, my hometown” – said the Andrea with emotion in his voice.

“Great credit for this important result goes to the car, which for the fourth year accompanies us along the legs of the most beautiful race in the world. This year the race was decided in the last legs, where we managed to overtake the crew that was leading the ranking with three points more than hours. Many compliments then to our opponents because they put up a good fight, making this year’s race incredibly tight and exciting. A special thanks to co-driver, Fabio, because you win as a duo. A special thanks also to my father who helped us far away from us in the most difficult moment by helping me last night repairing our Alfa Romeo on the phone”.

This years Mille Miglia was blessed with good weather, which brought its own extra challenges for the vintage and classic entrants, due to the summer heat. The route also proved especially challenging route, with the teams taking on all three passes of Cisa, Futa and Raticosa that, which were added to the Mille Miglia re-enactment for the first time. Out of the 375 cars that took part in the race, 341 crossed the finish line, which was an impressive finish rate.

Second place was won by Andrea Luigi Belometti and Gianluca Bergomi, driving a Lancia Lambda Spider Casaro of 1929 (competing with the number 41), who, on the arrival ramp, said: “Now I’m pretending to be happy for my second place… seriously, these are the races and we have to accept the final result.”

“We all know well the winner, Andrea Vesco, and how strong he is, so it’s okay. We stayed in the race and competitive for all four days and that’s the most important thing for us. See you at the next 1000 Miglia”.

The third place went to Gianmario Fontanella and Anna Maria Covelli, who drove the 1927 Lancia Lambda Casaro. Racing with the number 24, the team finished in the same position in 2020.

Commenting on their 3rd place finish, Gianmario Fontanella stated: “Last year we did well, this year was a fantastic race, even if much more difficult. We are very satisfied of the position we achieved.”

With the success of the 1000 Mille Miglia 2021, entrants and fans can look back on a glittering display of historic cars and eyes will now look to the 2022 re-enactment of the greatest road race in Italy.